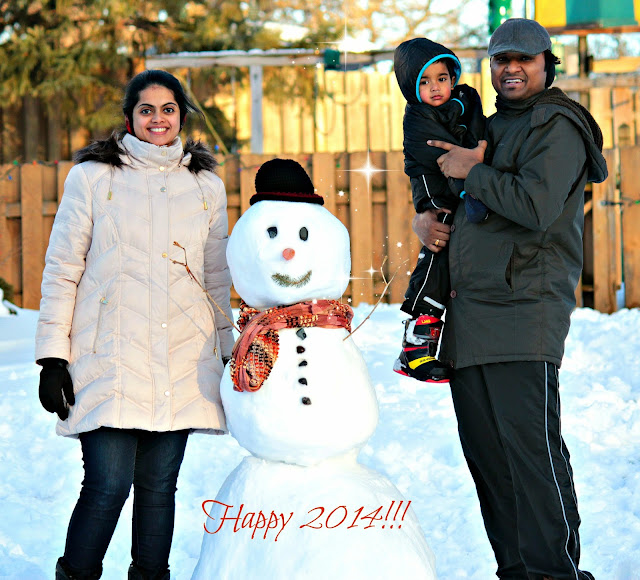 The New Year is upon us waiting for us to fill it with memorable moments, so lets grab it with a happy heart and start making memories....
Wishing all my family, friends and trusted blog readers a very Happy, Prosperous, Healthy and Memorable New Year...Happy 2014 from my family with our very first snowman!! (infact we made two :-) )

See you all in the New Year now!!!

Posted by Manju @ Manjus Eating Delights at 11:47 AM 7 comments

*** This Giveaway is CLOSED and we have a winner*** 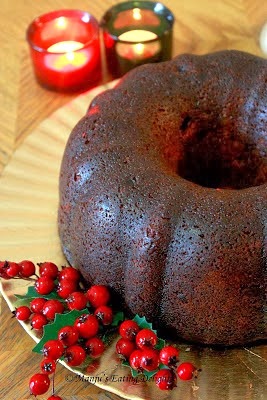 With Xmas and New Year round the corner everyone is in a festive mood. Shops are brimming with cheerful people all doing their last minute shopping, buying gifts and goodies for near and dear ones and getting all ready to celebrate a lovely Snowy Christmas (atleast here in Minneapolis) and a wonderful New Year.

As this year wraps up, I wanted to share my love to all my treasured readers by keeping a very homely giveaway….A yummy Goodie Bag!!
I'm going to share with one lucky winner my absolutely yumm Rich and Moist X’mas Fruit Cake using dry fruits soaked in Rum (6" round cake). Its simply the best and you’ll know why once you taste it….
Wait! that’s not it, I’ll also be baking up a batch of my favorite melt-in-your-mouth Vanilla Shortbread cookies especially for you and it will be beautifully decorated and Oh so fancy!!

This Giveaway is only for US residents, but feel free to enter if you have a friend or relative or sweetheart ;-) living in US for whom you’d like to win this goodie bag. I can guarantee you it’ll definitely make his/her day!


All you have to do is 'Like' my Facebook Page and share your comments on a question I've asked in the widget. So go ahead, I hope you win :-)

Terms to note:
Only 1 entry per person. Giveaway is open to US residents for ONE Week only...so hurry up :-)
The Giveaway closes on 18th Dec 2013 at Midnight (CST) and 1 winner will be selected.

So c'mon, don't miss this opportunity to enjoy some fresh baked homemade goodies.
Feel free to share this post with friends and family and increase their chance to enter and win as well.

I wish all of you a very Merry X'mas and a Happy New Year in advance!! 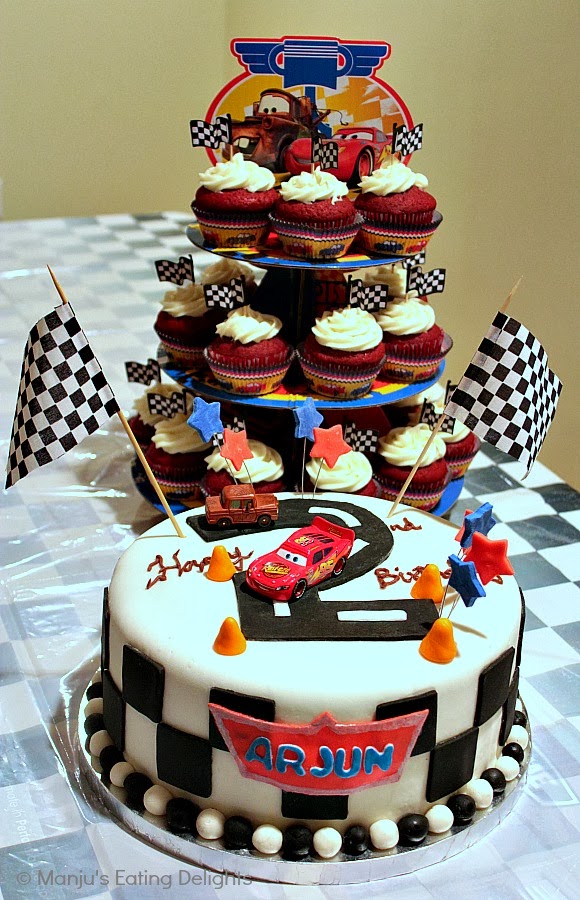 Hello all…sometimes when you almost temporarily stop doing something that you’ve been doing for long time it takes a while to get into the ‘Start’ mode again :-) I guess that what’s happening these days with blogging as well…though I miss my regular postings, I kinda like it to not having to sit in front of my lappy both at day (in office) and at night (at home) and for time being I have the excuse that my laptop is too slow and won’t type well. My new laptop is on its way, but I’m still gonna share something today, again it’s something that I haven’t done for a looooooong time now and was initially scared if I could pull it off.  Yes, a fondant cake and a theme cake at that.  It’s a long post, I hope you will read till the end and enjoy the pics along the way :-)

Well, the last Fondant cake I made was in March and it was this pretty Carousel cake. After that we got all busy with moving to our new house, getting settled, made a simple buttercream cake for my lil’Appu’s 2nd b’day  and though I did make several cakes over the summer, most of them were cakes without any frosting, that’s how my family prefers it unless it’s a special occasion.

So anyway when my friend invited us for her son’s 2nd b’day party I was more than happy to jump in and offer to do the cake. You can say I was just itching to do one ;-) When I asked her the theme , she said Arjun loves Disney Cars and apparently he does have a lot of Cars themed toys as well. And she was very nice and said you can do whatever you want, any flavor, size etc. We decided on making a cake and some cupcakes considering the number of guests, Oh and her only request was to write Happy Birthday on the cake…isn’t she sweet :-)

Now Me being Me, I din’t want to do a simple themed cake. I wanted the theme to be in and out. Confused? Let’s continue reading….
First let me begin with the cupcakes. I just kept them simple, used my all time favorite Red-Velvet Cupcakes with Cream Cheesefrosting recipe and used race cars themed cupcake liners and race flag toppers. My friend got the Cars themed cupcake stand and they were all neatly placed on the stand. 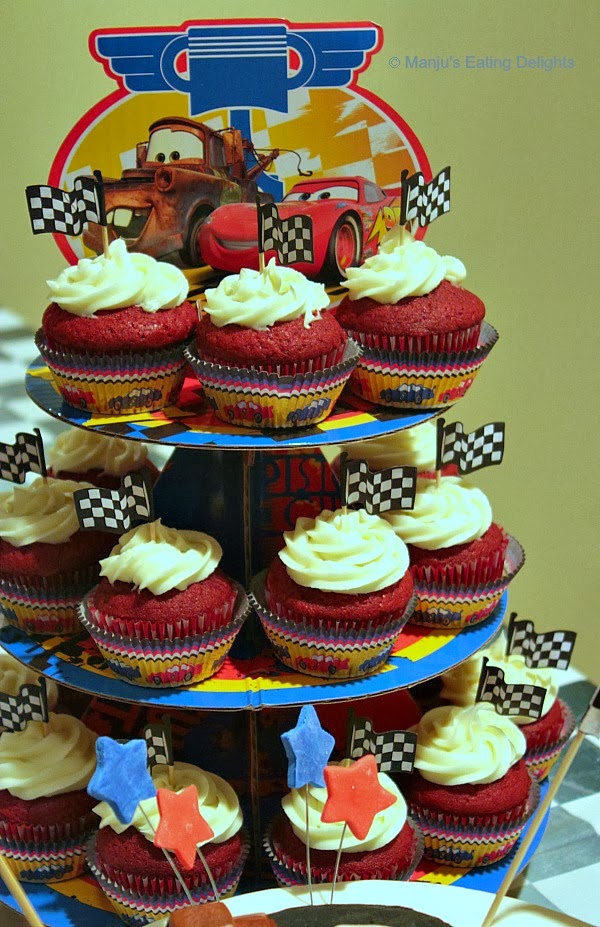 Next, the Cake. For a Cars theme the race-flag black n white checks combo seemed to be quite a highlight, so I decided to include that in the cake deco.

I also wanted some sort of a cake topper. Now, I’m horrible at modelling any figurines and the last time I tried that were to make Clowns for my lil’Appu’s first b’day cake and I decided I won’t try it again unless really needed. So I went the easy route and just bought a toy McQueen and toy Mater, atleast lil’Arjun could play with them.

Then came the final touches like the flags, stars, name board and the orange traffic cones, which was a last minute addition just for some burst of color. Oh! And of course the race track was shaped like the number 2 to mark the age and my lil’toys were on the track vroom vrooming away…. ;-) 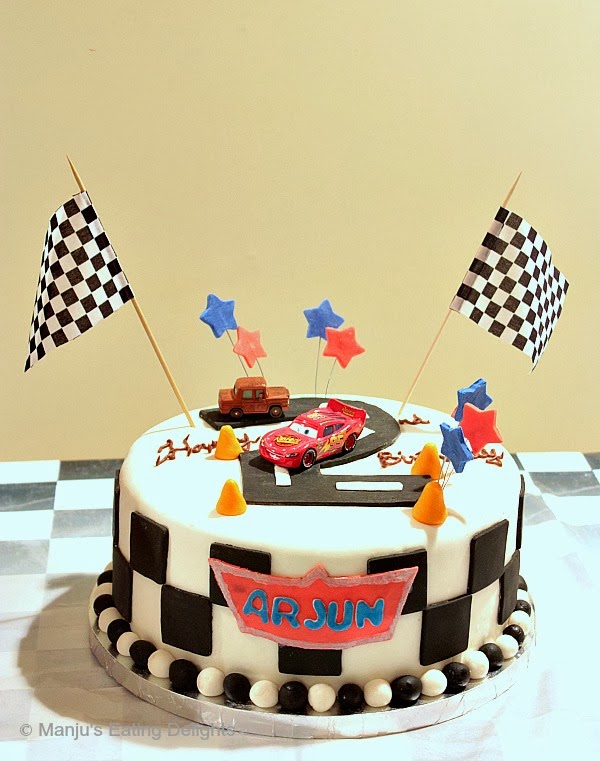 The Cake was 10” wide and 4” tall. And with frosting in between it gets a bit more taller. The biggest challenge was to drape this gigantic cake in fondant (it may not be gigantic for cake decorating experts, but for me this was huge).  I have always stepped away from draping such tall cakes , for instance : Appu’s 1st b’day cake which was same size (bottom tier), I did a pleated pattern 'coz the when I tried to put fondant over the tall cake, it literally slipped and created a huge mess. For his 2nd b’day (again same cake size) I decided to do buttercream (much easier ;-)) 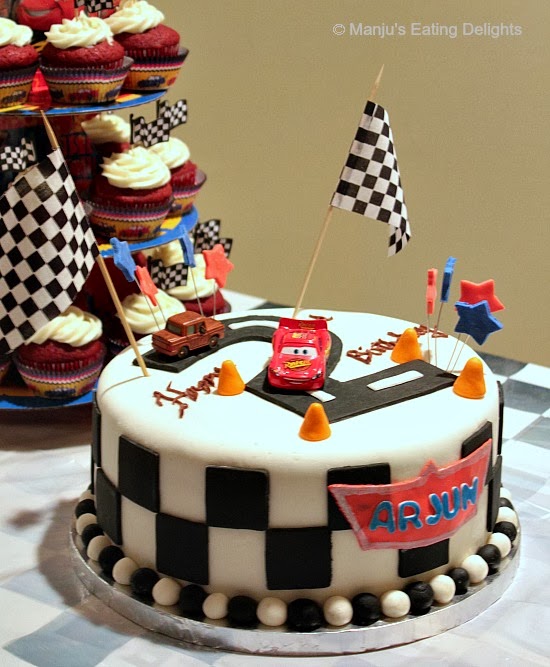 For a cake this tall and wide, you need to roll out fondant to atleast 16-17 inches round…heck I can’t roll out a small chapathi also properly, then imagine rolling out to such dimensions. But for the deco I had in mind, no simple work around was there but to fully drape the cake in fondant.
I made two batches of my homemade Marshmallow fondant (white color) and rolled it out nice and steady until it was approx 17” round, took a deep breath and carefully placed it over the cake and phew, it stayed, it din’t tear or slip or anything… Thank God! I did not want to make black fondant so I just bought it from the store. With remaining marshmallow fondant I colored some orange for the traffic cones and some red and blue for the stars, name board etc.
(Btw, Wilton’s Christmas Red gel color is horrible, it gives a pinkish hue than a red) At that moment I wish I had bought red fondant also from the store.

Just a note: The cupcake race flag toppers, the flags on the cake and McQueen/Mater are non-edible

Now to another fun part where I wanted the theme to also be inside the cake. I decided to make a Chocolate and Vanilla Checkerboard Cake (made from scratch and shaped out) with Chocolate buttercream frosting to match the race flag's black n white pattern and this is what a slice looked like :-) 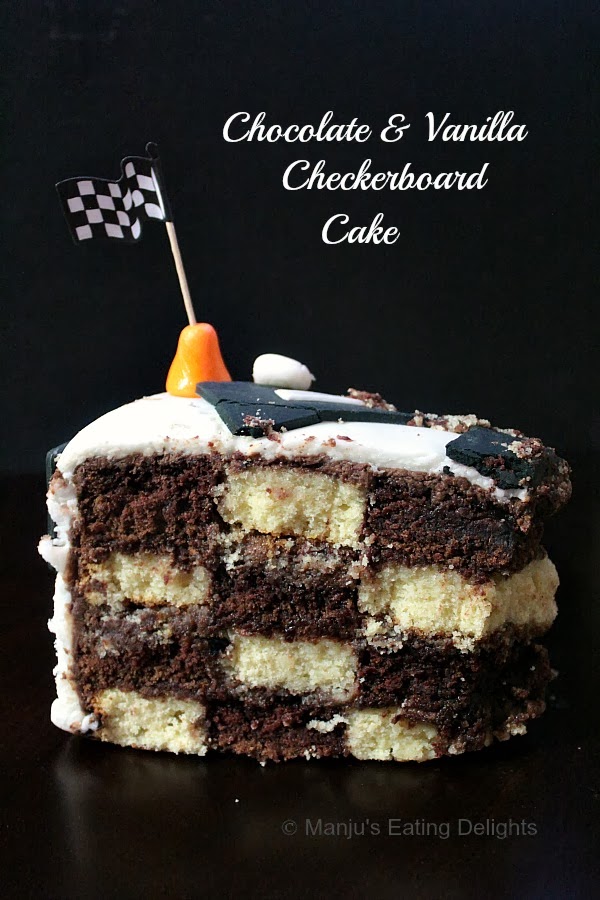 And it definitely added a wow factor and all the guests at the party loved it. Some of my friend’s guests, who said they never eat cakes at birthday parties actually went for second and third servings and said that the aroma of the homemade cake itself was simply divine. **BIG WIDE SMILE** :-D

Psst:  I should also add that I made this cake half asleep as I had to stay up two whole nights which wasn't planned btw (one night black friday shopping, the next night cake decorating) with no naps in between...Phew!!

Thanks to Manish for always helping me clean up and keeping lil'Appu away all night, who apparently has a thing for Cakes and gets super excited about it (I wonder where he gets that from) ;-)

So there you go my dear friends, my version of a Disney Cars themed Cake and Cupcakes.  I hope you enjoyed it and I really enjoyed writing all the details.