The last themed cake I make was back in August 2015. Yes! It's true...I don't think I have shared that cake here yet either...meh! The whole time I excused myself from any fancy cake stuff in the excuse of being pregnant, then due to our move to Charlotte,  all of my 'cake stuff' were packed away into dozens of boxes and then our newborn came along etc etc

Anyways not going to dwell in the past, so here I'm sharing my latest cake , thanks to some awesome friends who trusted me to the core on everything from flavor to design. Our friends S and S had had their third baby boy in March and they planned to have a fun get-together with close friends and family on April 14th to celebrate the baby's naming ceremony which happens when the baby is 28 days old. April 14th also happened to be the day of Vishu festival, which is a popular harvest festival for folks from the state of God's Own Country, Kerala . 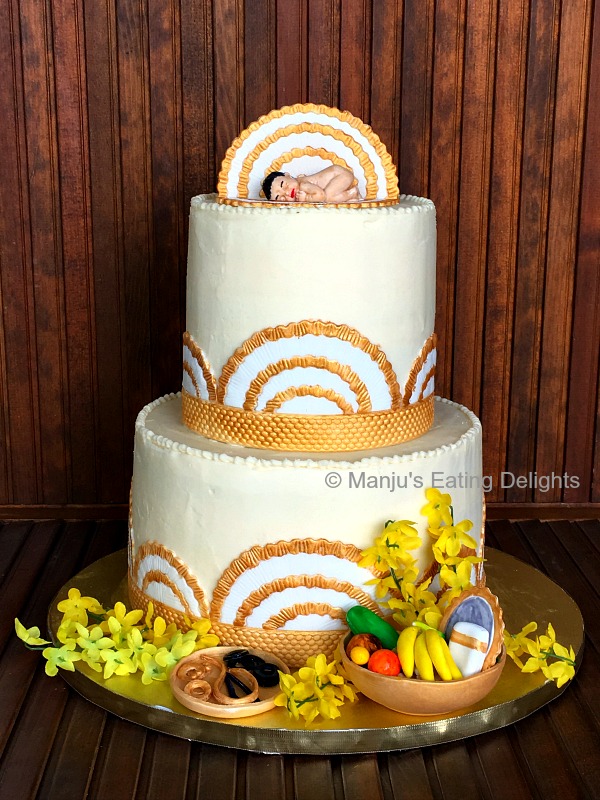 As it was Vishu festival and also the naming ceremony (aka, Iruvathiettukettu in malayalam) I decided to go for a traditional look which will depict both the festival as well as signify the baby's special occasion.

One of the most popular arrangements done for Vishu, other than a scrumptious vegetarian feast (sadhya), is the VishuKani. The Malayalam word kani means 'that which is seen first', so Vishukkani means 'that which is seen first on Vishu'. The Vishu kani arrangements usually consists of a tray or golden bowl, Uruli filled with various vegetables and fruits, a mirror, ornaments, new dress and most popularly, yellow Konna flowers along with a Lamp and the photo of a Hindu god.
I used a random image of a Vishukani from google  and re-created the look using gumpaste and this is what it looked like. I was lucky enough to find the yellow flowers at a local art&craft store that perfectly resembled the yellow Konna flowers. Except for the flowers all other VishuKani items are made from gumpaste and edible. To signify the baby's naming ceremony function, I decided to make a cute little sleeping baby figurine and a tray filled with the various ornaments that we would adorn the baby for the first time after he/she is born which generally includes a Gold waist chain, Gold baby bangles and anklets, Black thread worn around the waist and black bangles (karivala).  Again all items are made from gumpaste and edible. 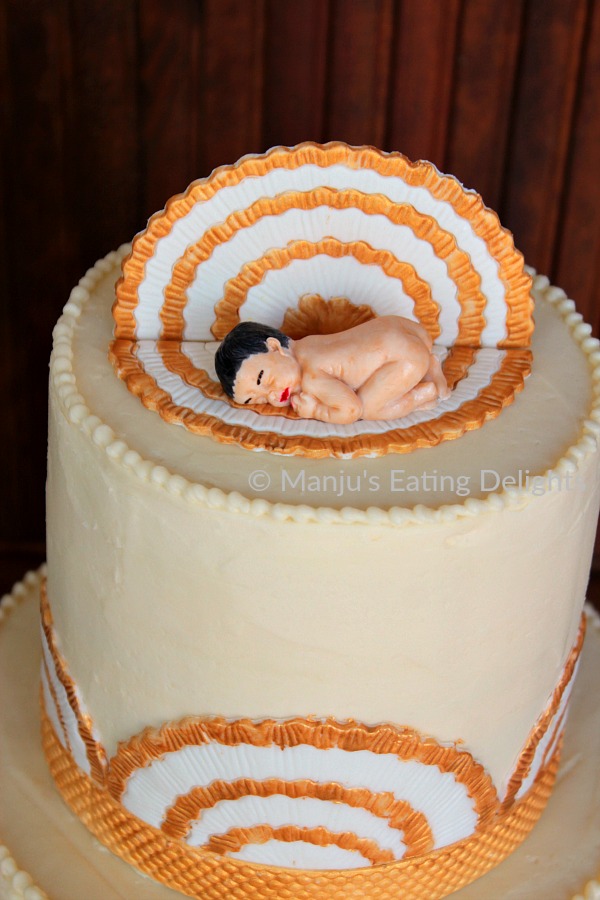 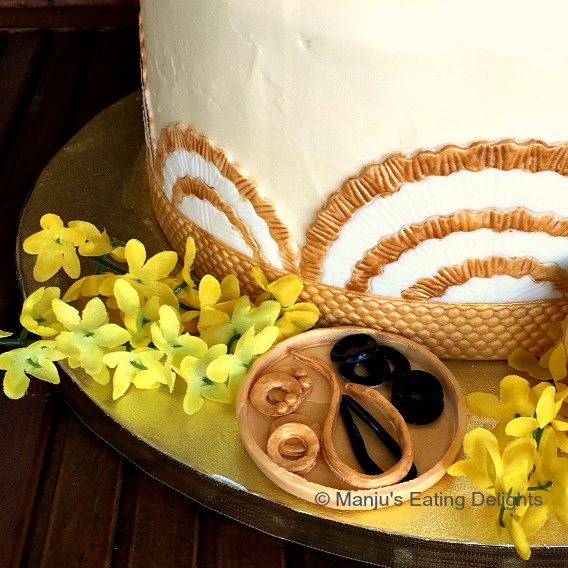 Here's another look at the Tray of ornaments and Vishu kani arrangement. 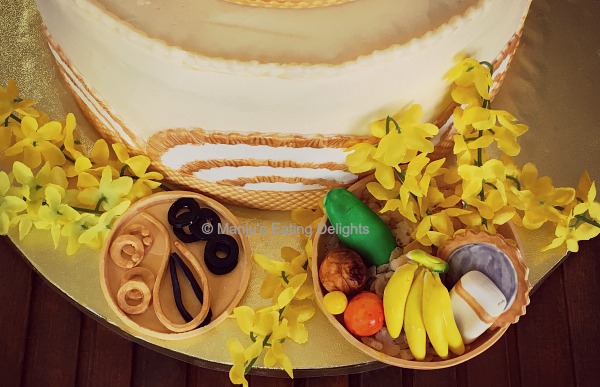 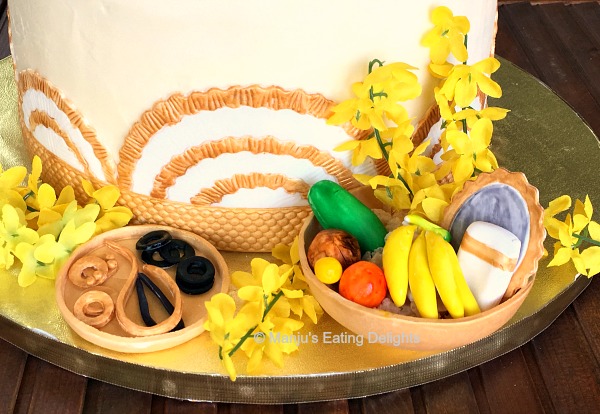 For the overall deisgn on the cake I went for the Kerala Set Sari/Mundu design which is ideally a cream/ivory colored cloth with gold border. 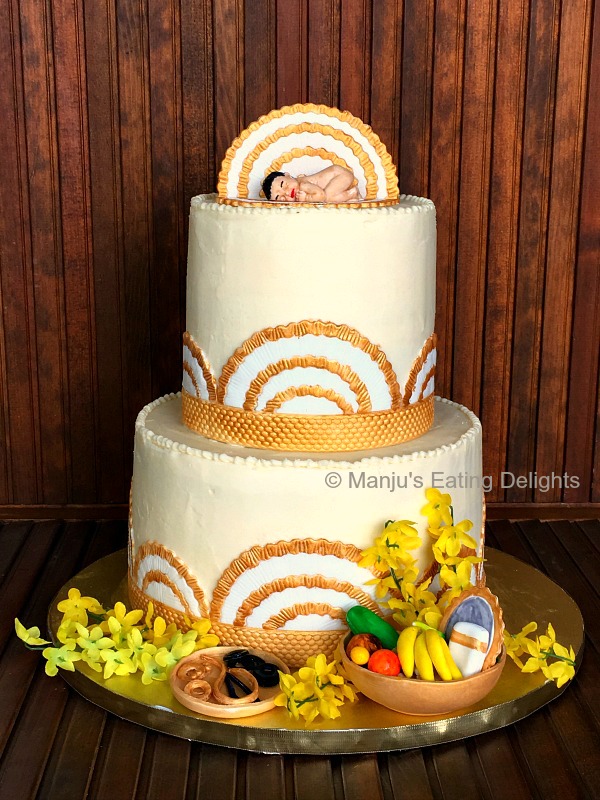 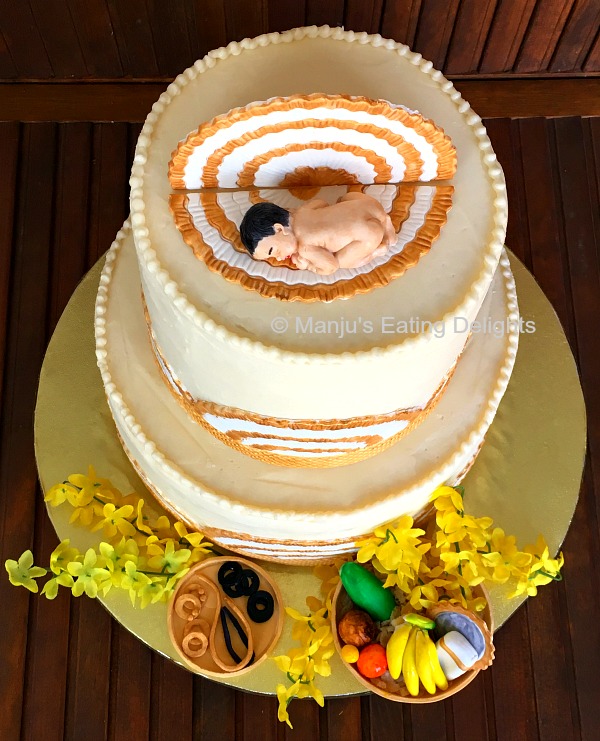 When I took it my friend's home, they wanted to display it along with some traditional Lamps, statue of baby Krishna and also their Vishu kani tray. Here are some pics taken by my friend himself. 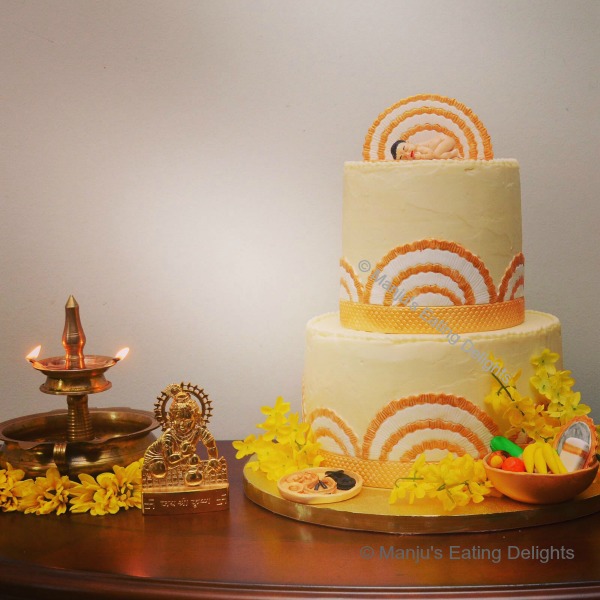 That's me with my little Mihika baby. It was her very first Vishu and we are wearing traditional Kerala style Set sari and pattupavada respectively and coincidentally our colors matched - Orange. Anyways, I'm digressing from the actual topic... the Cake ;-) 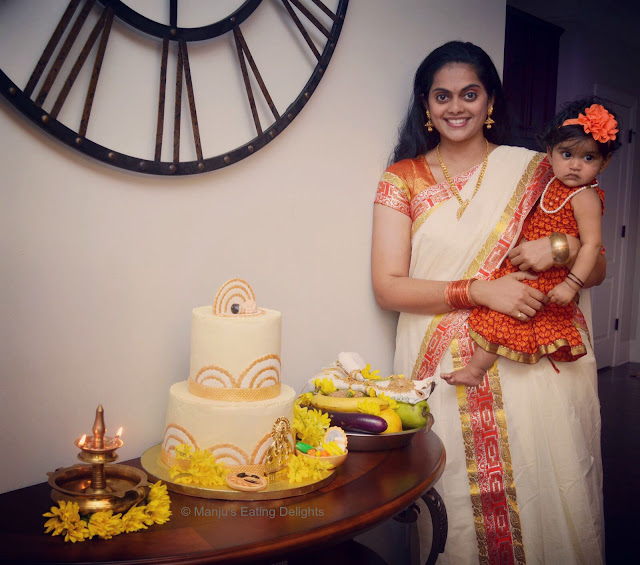 The cake flavor was White Cake with a filling of Mango mousse, pieces of mango and peach with vanilla Buttercream frosting on the outside.  I didn't get a picture of the sliced cake but it'll look exactly like the cake slice from this cake.

Everyone was thrilled to see the cake and had never seen a traditional Kerala theme depicted on a cake. I was thrilled to be able to successfully deliver the design I had in mind and anyone from Kerala could relate to it without even explaining the theme.

Although not entirely perfect I was very happy with how the cake came out. Buttercream frosting is not my favorite when trying to get smooth and clean sides but I did not have the time to do a fondant cake. Maybe next time... ;-)
Hope you enjoyed this cake as much as I did from making to blogging about it. So until next time all I have to say is do what you love doing and see you all soon!