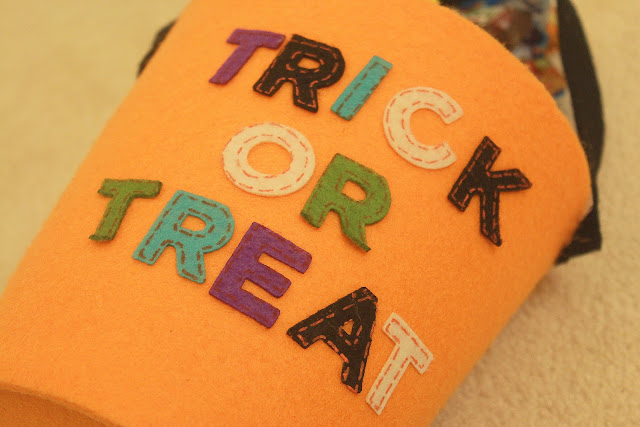 Hello everyone , how are you all? How was Halloween? As usual I'm always late at posting any festival or 'important day' related posts. Blame my laziness and the rather crazy hectic office work schedule we've been having lately and my weekends just get over in a blink.
But I still see carved pumpkins and Halloween decorations outside and inside of several homes , so I guess I'm  not too late to share my halloween evening with you all! It was extra special for us as it was the first time we all went trick-or-treating :-)

To be honest, all of October I kept thinking and planning to cook or bake something which screams Autumn or something Halloweeny , but trust me, I really have no idea when October started and when it ended. The days literally flew by and although dishes made with Pumpkins and Apples need not just be restricted to Autumn / Halloween day specials, I missed my chance when all the other blogs out there were displaying their Autumn delicacies...Well I won't be disheartened, and I shall come up with lots of recipes which you can hopefully try next year for your Fall get-together or Halloween party :-)

On Halloween day Oct 31st, at my office we had a lovely potluck and costume contest. The potluck was also a competition for the most eerie/scary looking yet yummy food . I never ended up buying a costume but I did make an  eerie Halloween punch, I made a slightly concentrated Rose Lemonade with some Lychee juice and filled up some Lychee fruit with blueberries for an eyeball effect and called the drink 'Eyeballs in Blood' !!!
I din't win (if anyone is wondering) but people liked the idea of my punch (Here's a snap taken on Iphone) , it tasted really good by the way. 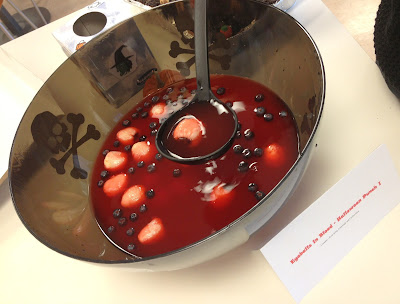 [ I really love creating anything Eyeball related for Halloween, last year I made these Scary Eyeball Pumpkin Cupcakes :-) ] 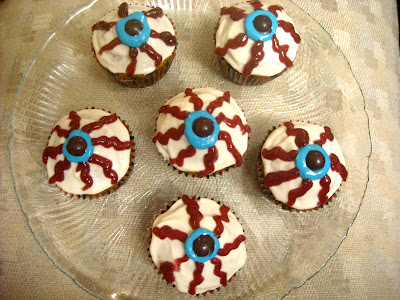 And in the evening though we came late from office , we were immediately greeted by several trick-or-treaters come over in large groups to collect their share of treats (the little ones came with their parents) and I saw the my little guy was getting super excited.
We were almost on the verge of dropping our plans of taking him for trick or treating (bcoz he just wouldn't get into his costume) when I got this weird idea to make him wear his own clothes and draw him a moustache with my black kajal and call him 'Little Man with a mustache' , but then I realized he had a  military print sweatshirt combo, so he was quickly transformed  into 'Army guy with a Moustache'.
And off goes my 'Moocho-wala-Sipayi'  for his first trick-or-treat hunt ;-)
(For those who follow me on facebook already know this as I had posted a pic of his attire , but here are more pics) 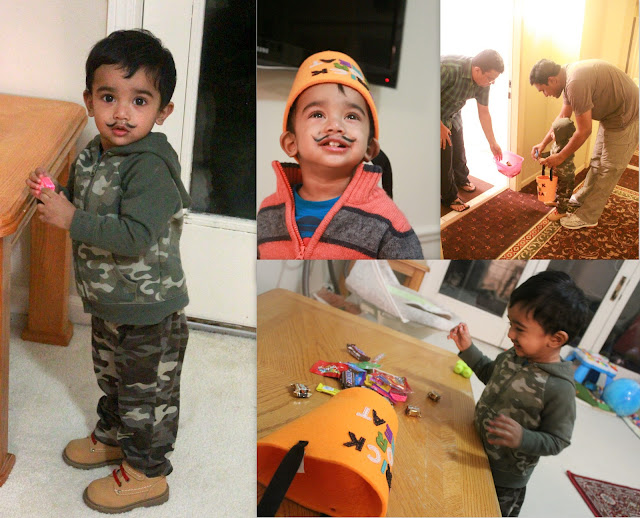 Though we just went around our apartment building , my little guy had lots of fun , and I was literally running behind to catch up with him to get a good shot of him trick-or-treating with his dad.
And to my surprise even now, when others in the building see him , they remember him as the little army guy! Well I'm so happy that his 'instant' costume was so liked and remembered by all!

And all the trick-or-treating made my big boy Manish all hungry and he said he smelt aromatic Chicken curry smells from the other homes (roll-my-eyes) , and I had to instantly make chicken curry for dinner :-) I guess I'll post the recipe some other time. So all in all, we had a great night and a Happy Halloween and I thank God for all these beautiful memories! :-)