Our Housewarming Ceremony and a birthday special Eggless Vanilla Cake! 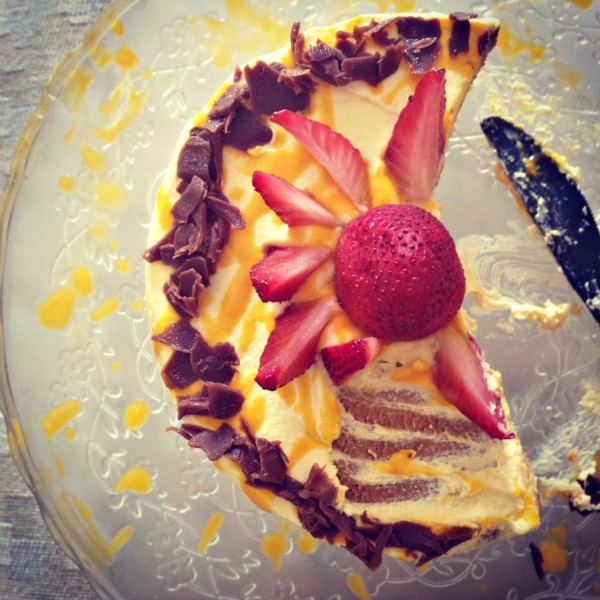 Days are running by so fast. All I can remember is moving to our new house on March 29th and it’s already Apr 10th…Until 29th we were packing and packing and now we are unpacking and unpacking and it doesn’t seem to get over at all! But we’re taking it slow. We’ve somehow managed to get the kitchen set up and functional, so now the other rooms can get slowly dressed up :-)

Coming back to March29th - quite an eventful day and I wanted to share a few glimpses here and there of our Housewarming Ceremony and ofcourse a lovely last minute Eggless Vanilla birthday cake with Mango whipped cream frosting which I made for my Big B’day Boy in between all the chaos!!!
Oh, and  my parents are here btw…Yaay! So we had a lot of help in the end with packing, cleaning and Cooking :-P I hope you enjoy this post, so keep reading and enjoy the pics :-)

Most of us Indians believe in auspicious days and specific times to begin anything that holds a great deal of importance. We call it Muhurtham / Muhurat.  So we checked with our parents for an auspicious date to move in to our new home and anytime after 9:30am on March 29th was really good to enter the new home as per some astrologer. Manish celebrates his b’day on March 29th as well, making the day even more special!
Let’s begin with the Cake :-) I’ve always made Manish’s b’day cake. Two years back also we were shifting to a new apartment exactly on the 29th of March and yet I managed to bake a chocolate cake being 6 months pregnant then!! Last year I made a Vanilla Sponge Cake with Raspberry Mousse , a day before we were going to …so always his b’day falls on a day when we are always neck deep with packing for something :-) So this year’s shifting and packing wasn’t going to deter my plans.

I made two 6” Eggless Vanilla cakes on Mar 28th.  One was for my b’day boy and the other one for my good friend who helped take care of my Lil’Appu while we went to work during the day ever since he was 6 months old. It was her wedding anniversary on 27th and though I was late with the cake I wanted to do something special and they enjoyed it!
The only ingredients for frosting I had was whipping cream and mango pulp and I used them to make the best Mango Cream ever! My choice for an eggless cake was due to the fact that we were going to have Pooja on 29th in the morning (and usually we try to avoid anything non-veg on that day) and my friend is vegetarian, so it fit well :-)
We cut the b’day cake at midnight on March 29th (the last day in our apartment), amidst packing up and phone calls from family and friends. Even our little guy was awake to wish Dada at midnight and graciously obliged to help cut the cake and also scratched off some portion of the cream and gobbled it up happily. The cake was awesome, dense yet moist and the mango cream was the best part!
The chocolate shavings on top was my failed attempt at making chocolate curls…will be trying that again another time! 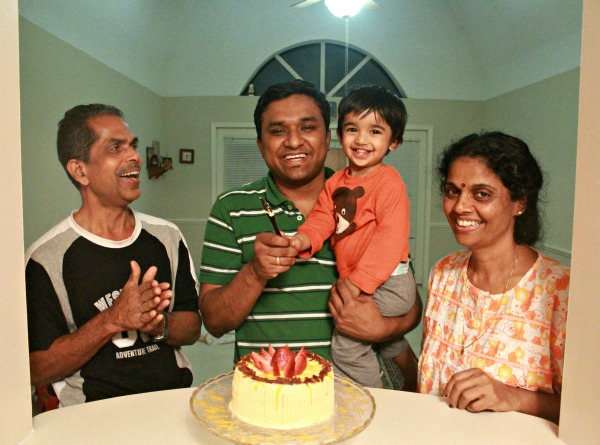 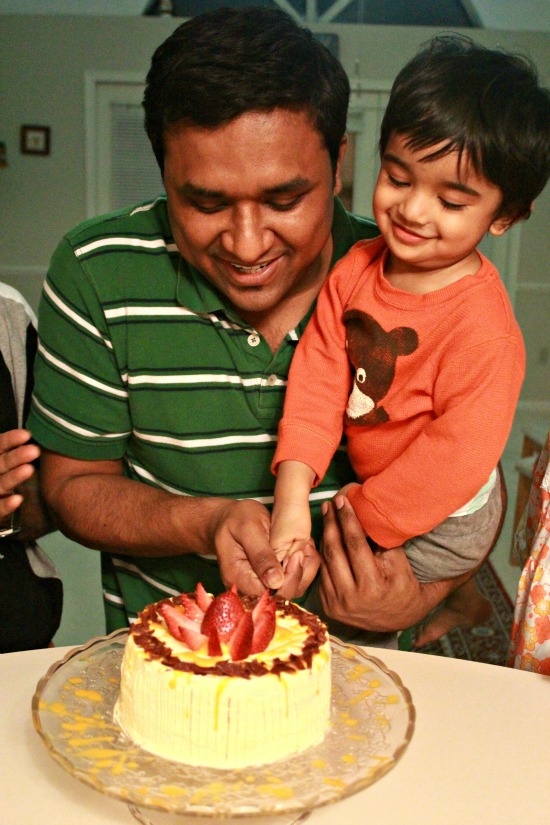 Soon after the cake cutting we all had a big slice each and went about with the remaining set of packing and then off to sleep, as we had to get up early the next day in preparation for our Grihapravesh  Pooja. (Recipe for the cake is shared at the end) 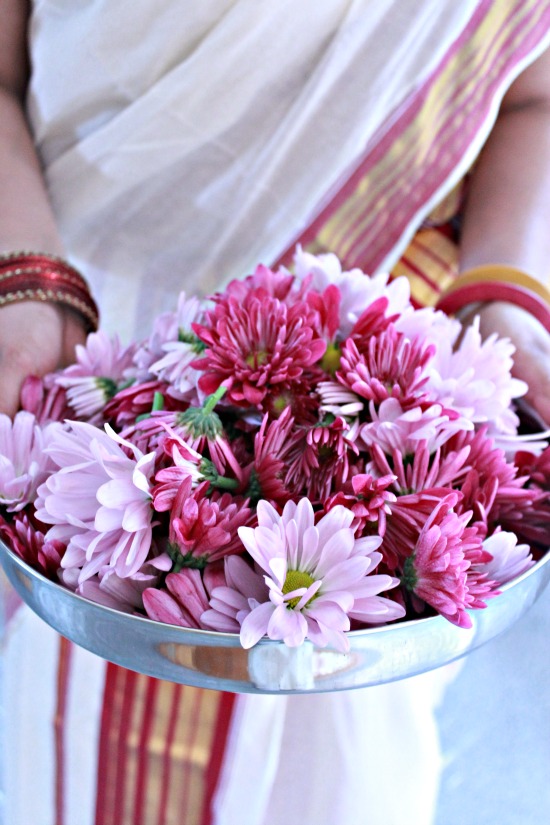 Housewarming or Grihapravesh ceremony is performed on the occasion of one's first entry into a new house. It’s performed to ward off evil and bring in hope, prosperity and happiness in the new house. The ceremony included Vaastu Pooja and Ganapathy Homam. As March 29th was the most auspicious day for the ceremony, we had called a priest/poojari to come to our new home to offer prayers and bless our home. Only family was present for the ceremony and I’m going to share few snaps of the happenings before, during and after the pooja.

That’s me plucking out the flowers for the Vaastu Pooja. Rarely do we come across a pooja in Hindu religion without flowers. It is offered to the Gods while doing the prayers. 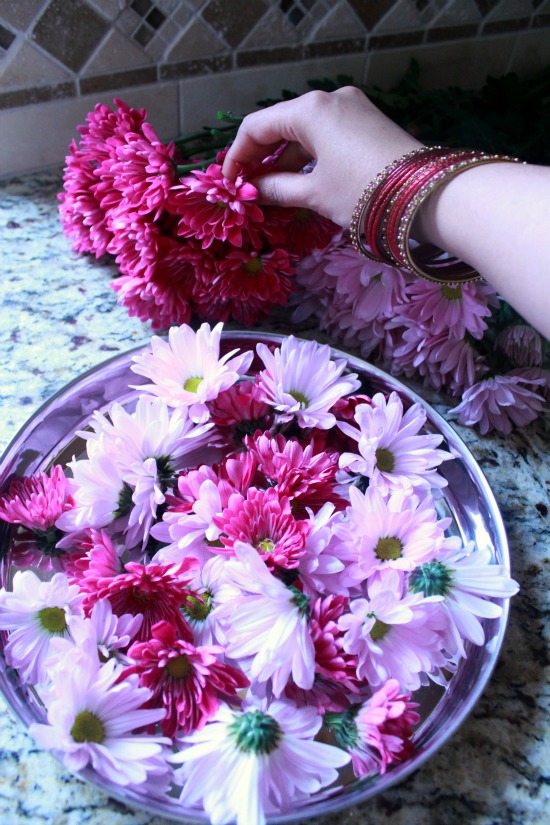 Phal (fruits) and Phool (flowers) are a must at any pooja and we got them arranged. The Green Pumpkin you see below is used as a 'Dhrishti' - to ward off evil eyes (just a belief, not that anyone has evil eyes!) It's usually kept in the front of the house facing the north-east direction...but we kept it on our backyard patio deck facing north-east. 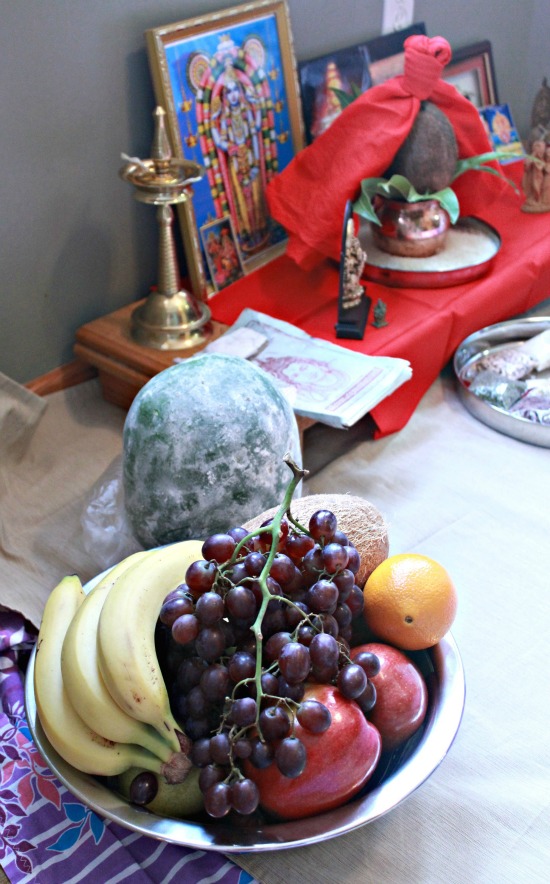 That’s the sweet Pongal my mom made as Prasad before the prayers began. Prasad is an edible food that is offered to the Lord and once the prayers are done, we consume it in the belief that the food has been blessed. It can be sweet or savory but vegetarian. This pongal was made with rice and jaggery , flavored with cardamom and garnished with fried cashews and raisins. It's the same recipe as my Sarkara pongal (without the moong dal) but made in a larger quantity. 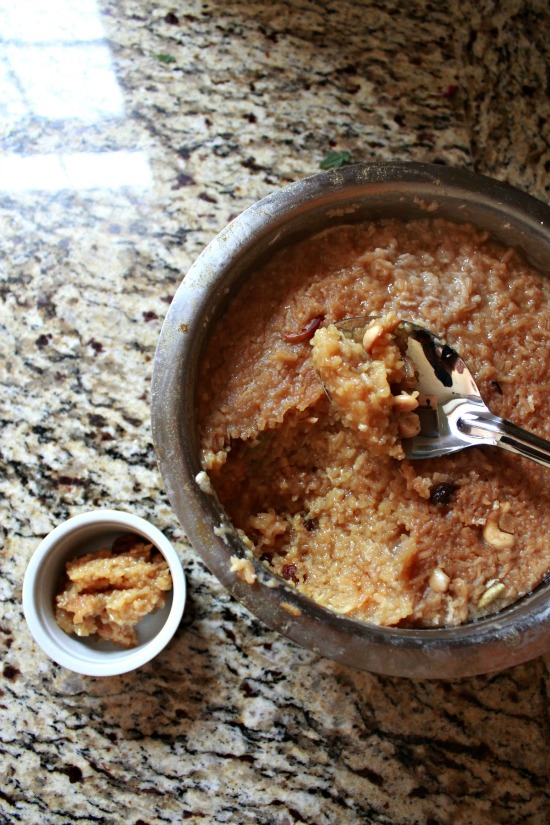 The poojari applies chandan and kumkum on the Kalash before starting the prayers for the Vaastu Pooja. The Kalash is an olden way representation of the body of God as no one knows what God looks like. The coconut forms the head, the vessel forms the body and the mango leaves forms the hair. There is water inside the vessel, which is considered as the fluid in the body. I got this info from the poojari, so if anyone wants to comment more on it please share your thoughts in the comments section. 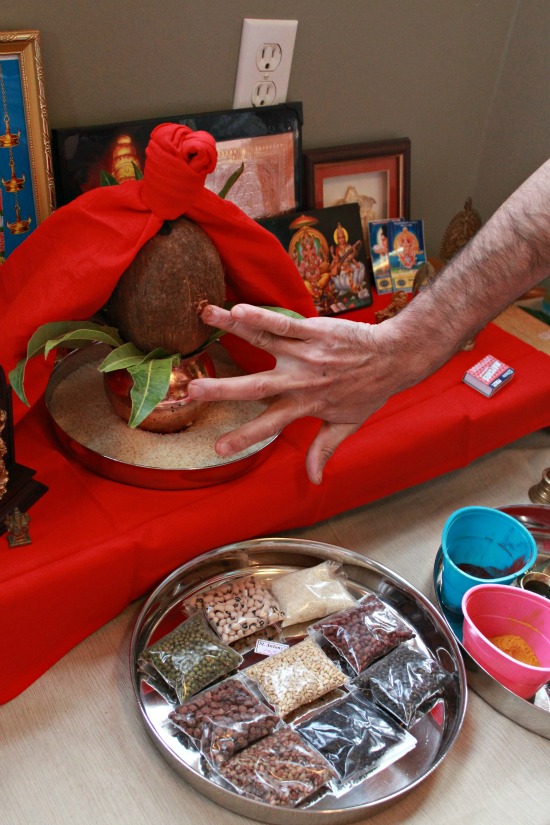 Navadhanya is placed in the plate/thaali above. ﻿Navadhanya are the nine grains that are offered to the Navgrahas - it is beleived that Navagrahas are the nine heavenly bodies that have the power to influence our life on Earth , they include the Sun (Surya), Moon (Chandra), Mars (Mangal), Mercury (Budh), Jupiter (Brihaspati or Guru), Venus (Shukra), Saturn (Shani), Rahu and Ketu.
The Navadanya includes Bengal Gram, Wheat, Horse Gram, Green Gram, Rice, White beans, Black Seasame seeds, Chickpeas and Black Gram.

After about an hour or so, the Vaastu Pooja was over. 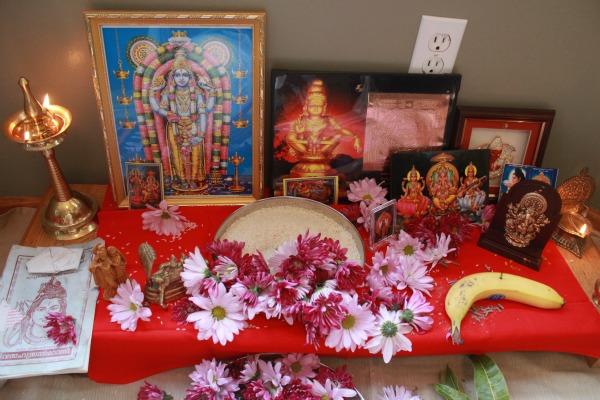 Manish was then asked to sprinkle holy water (the water present in vessel forming the Kalash) around the entire house with the mango leaves. (I had to quickly take this snap as he was moving too fast :-) ) 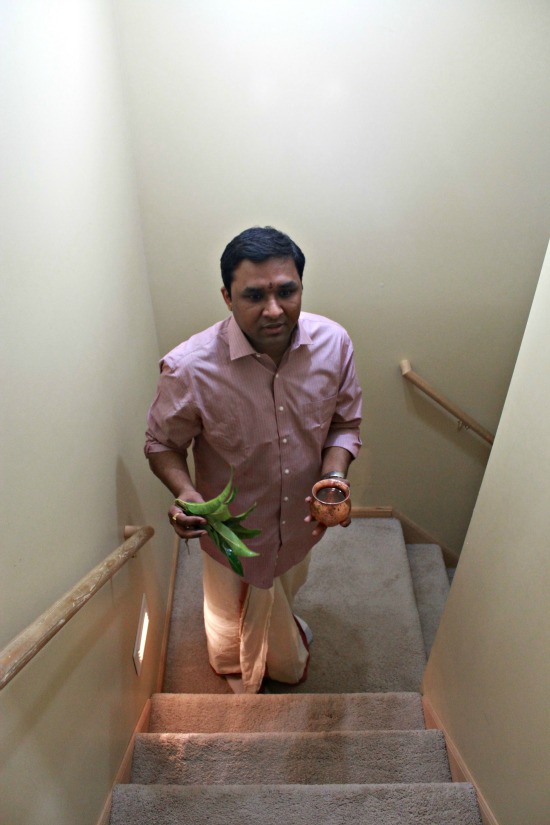 Then we performed the Ganapthy Homam, following the priest's instructions. Lil'Appu sat on my lap the whole time and was very well behaved and keenly observed the rituals. 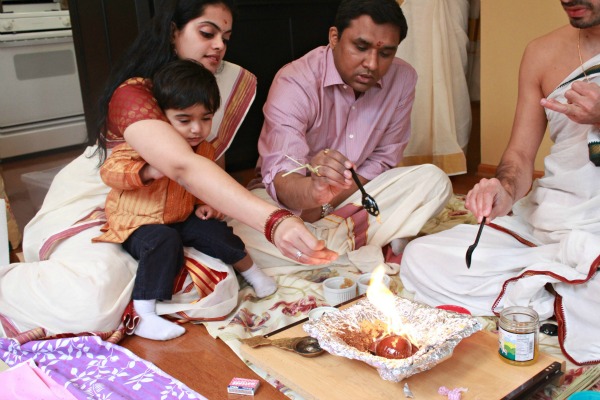 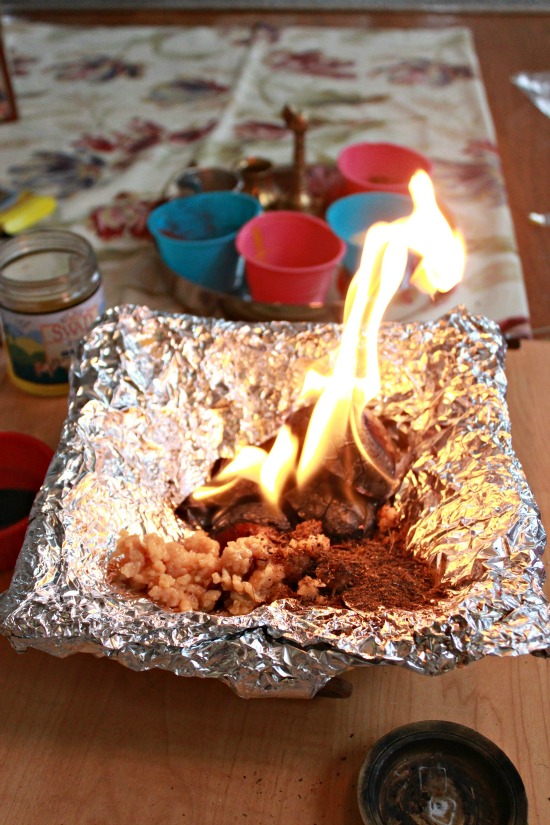 As part of the Ganapathy Homam that was performed Manish had to break a coconut in front of the house…some of which landed on my shoes :-) Coconut is the most common Prasad offered in temples and breaking the coconut symbolizes breaking our Ego and starting afresh. 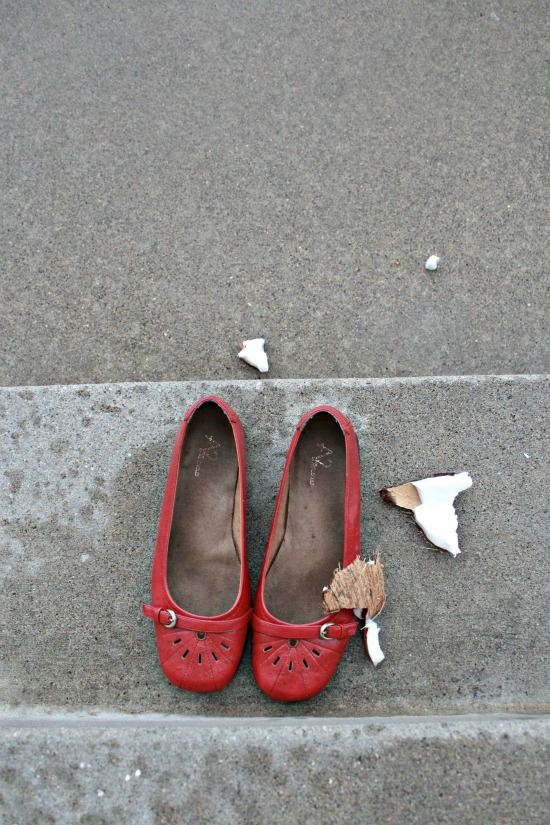 Another symbolic housewarming ceremony is to boil milk until it boils over. According to the Hindu belief, boiling of milk and letting the milk spill and overflow, would ensure that our lives are overfilled with abundance of wealth, health and happiness. Also distributing the left over milk signifies that the happiness and sorrows are distributed equally amongst the family members.
(I couldn’t take a snap of the milk overflowing, but we served the milk in Wine glasses…that’s the only glass we could find in between all the packed up boxes :-) ) 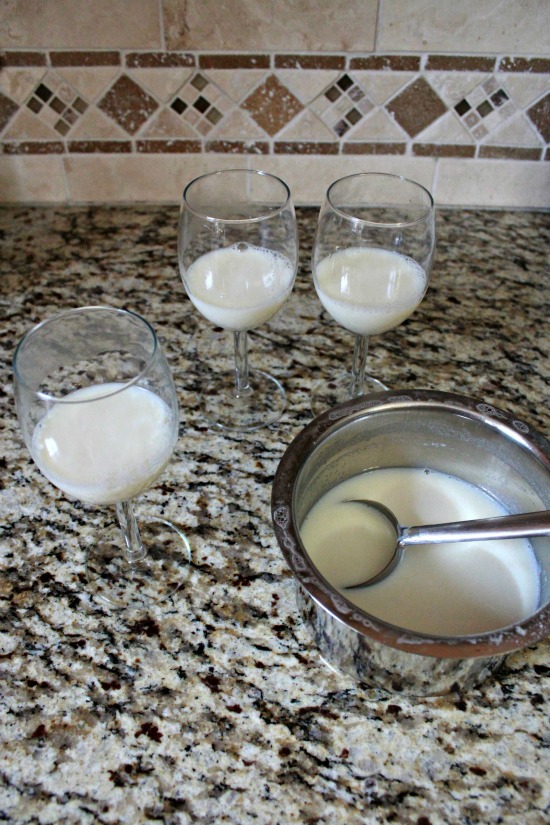 The Pooja went on for about 3 hrs and once it was over, we enjoyed the sweet pongal and milk – we hadn’t eaten anything until then…except for lil’Appu who was excused...hehe!
It was a beautiful and happy day. Lil’Appu was simply too excited to pose for any pics and these are a few we managed to click :-) 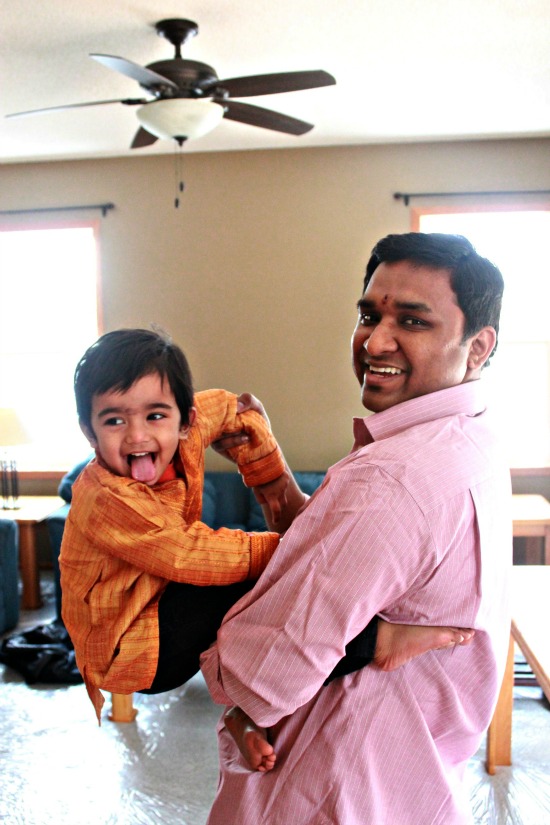 Later we went back to our apartment to finish off some more packing (yes, packing never ends…or that’s what I thought then) and then the movers were gonna come to help shift more boxes to the new place.

Now coming back to the recipe for the Eggless Vanilla cake which I followed from here. It’s a really easy cake to prepare and you don’t need any fancy equipment. I just used my whisk to mix everything. It makes a decent 9”cake or two 6” cakes.

Directions
For Cake
1. Preheat oven to 350 F and grease a 9" round baking pan with butter and keep aside. ( I greased two 6" round baking pans)
2. In a bowl sift together the flour, baking soda, baking powder and salt.
3. In another bowl beat or whisk together the butter and condensed milk for few minutes until well combined. Mix in the yogurt and beat again. Finally add the milk and beat until well incorporated.
4. Slowly combine the dry ingredients into the wet ingredients using a whisk or electric hand blender until no lumps are present. Be careful not to overmix the batter as it may result in a very dense cake.
5. Bake for 1 hour or until a toothpick inserted comes out clean
(For my 6" cakes I poured 2 cups+ 5tblsp batter into each pan and baked both cakes together for 35 minutes)
6. Let the cakes cool on a wire rack and refrigerate for about an hour before applying the frosting. 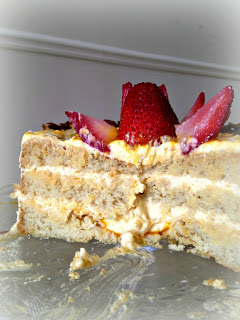 For Mango cream
1. Beat the heavy whipping cream in a chilled bowl until soft peaks form using an electric hand mixer or a whisk.
2. Add powdered sugar and continue to beat , make sure not to over beat the cream
3. Add mango pulp in intervals and keep beating until desired texture and taste is obtained (add more or less pulp as you prefer)

Assembling the Cake
1. Once the cake has cooled and is refrigerated, layer the cake. I cut the cake into 3 horizontal slices.
2. Apply mango cream on top of each layer as much as required and around the cake covering it in mango cream
3. Decorate with sliced strawberries, chocolate shavings, mango pulp etc as you prefer. Chill until serving.

I hope you all enjoyed reading about our March 29th :-) I had a lot of fun putting this post together and in the process I also got to know in depth the meaning and reasons behind our rituals and poojas.

I hope to be more regular at updating this space from now and I usually update my Facebook page with pics now and then when I don’t get time to update here, so join us there. We still have some more fantastic guest posts lined up…so stay tuned!