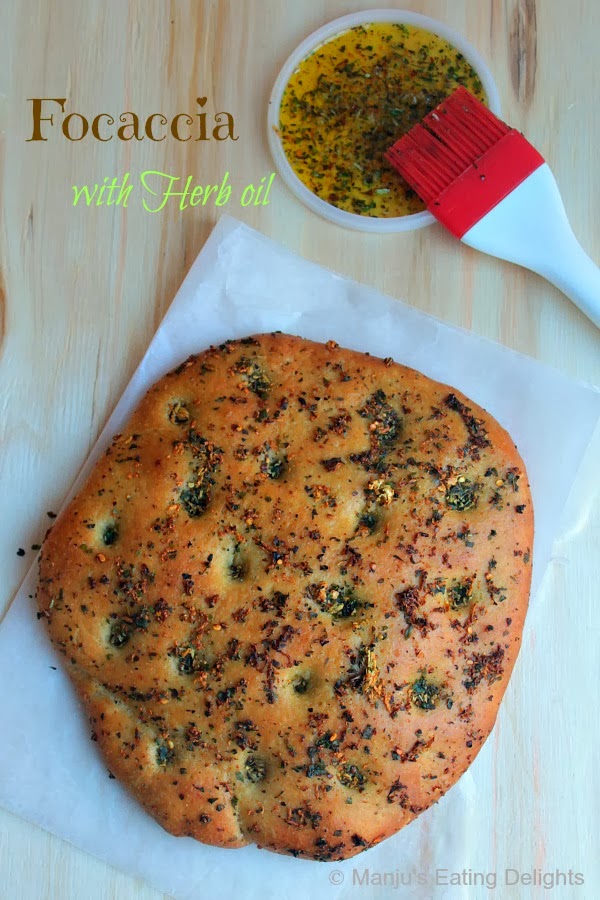 Those of you who’ve been following my blog for a while now, knows my love for baking and experimenting with new recipes. Bread baking is something that I am still learning and with each new recipe I try I learn a new technique and I love the whole process.
Focaccia is similar to Pizza but with few variations. I have read that in Pizza dough the amount of yeast used is less resulting in a thin, flat and flexible crust, while focaccia dough uses more leavening, causing the dough to rise significantly higher (source: Wikipedia). Another difference is in the shape, Focaccia is often shaped into a square, oval or rectangle shape. Sometimes the toppings used are added into the Focaccia dough instead of being topped.

Anyways whatever the differences are, all I can say is that it’s a soft spongy bread with a lovely  crust on top, perfect for dunking into soups or stews. 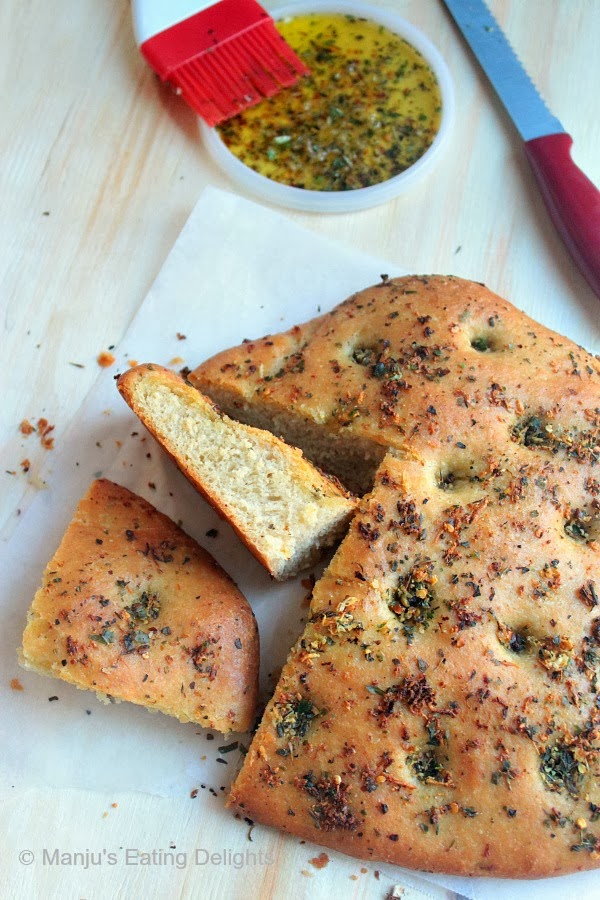 Several of my blog buddies have been baking this particular Focaccia recipe shared by Aparna and all their pics tempted me so much that I just had to try it out. The actual recipe was for a Focaccia Caprese (Focaccia topped with Caprese toppings along with Herbed oil) but fortunately/unfortunately for me I had none of the Caprese toppings available on hand...not even tomatoes, so I decided to just bake the Focaccia with the Herbed oil on top and it did not disappoint at all.

Now where do I begin raving about this Focaccia. The dough was so simple to make and it rose beautifully. The herb oil gets wonderfully absorbed by the bread while baking which creates a nice crunchy flavorful crust and the aroma and flavor seeps into the bread as well and finally yields a soft and spongy bread. 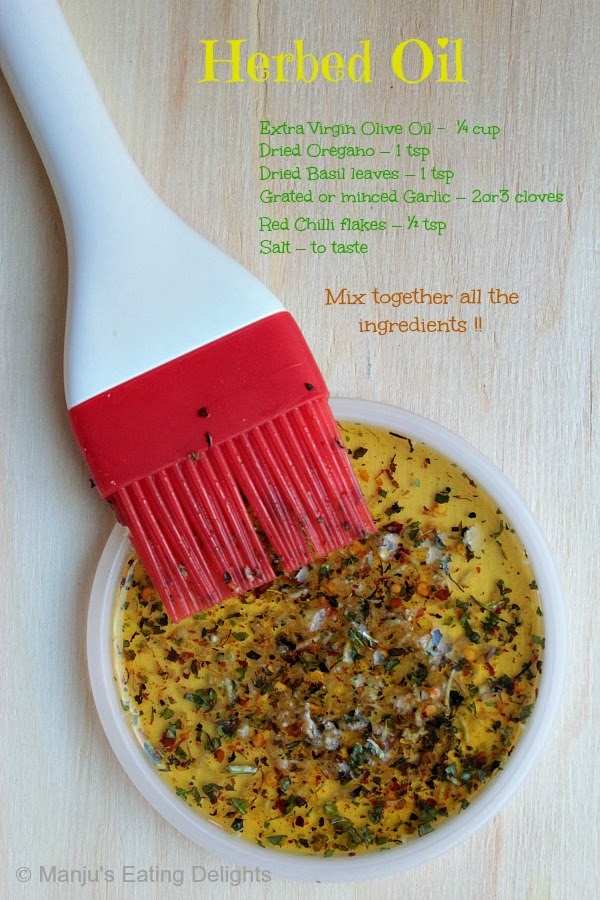 The Herb Oil is simply superb made using staple pantry ingredients and after brushing the Focaccia dough with the Herb Oil, you can later dunk your baked Focaccia into the same oil (if any leftover) and enjoy the bread, its just that good! 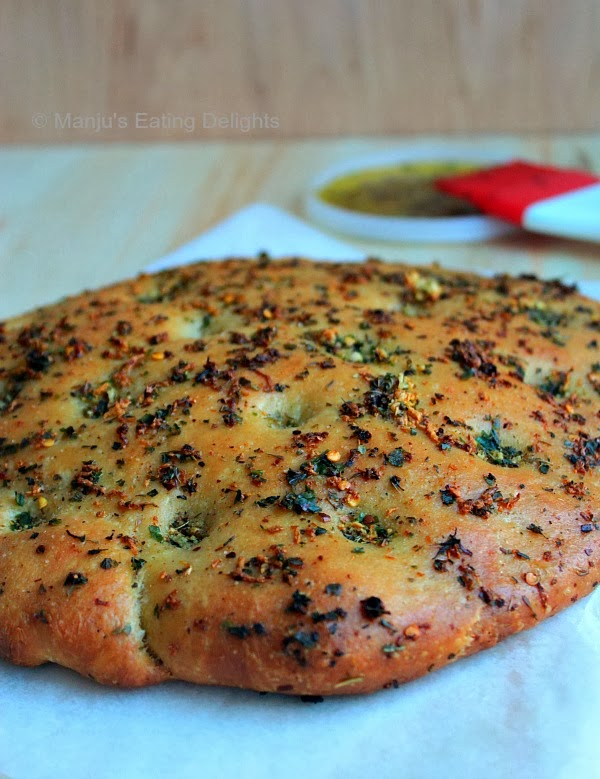 Directions
1. Mix together all the ingredients of the Herbed oil and keep aside.
2. First proof the Yeast:  Add 2 ¼ tsp yeast to ¼ cup warm water with 2 tsp sugar and let it stand for 10 mins undisturbed until it doubles in volume. If your yeast is active it will beautifully bloom and foam. (If your yeast doesn’t bloom even after 10-15 mins, throw it and make a new batch, else your dough will definitely not rise well)
3. Add the All-purpose flour, Olive oil, Proofed Yeast and Salt in to a bowl and using a kitchen aid stand mixer or your hands, knead the dough by mixing in ¾ cup to 1 cup warm water. Add water as needed to form a smooth yet mildly sticky dough.
4. Shape the dough into a ball and add it to a well oiled bowl and turn the dough around to coat all over and let it sit covered for about 1 hour until it doubles in volume.
5. Once the dough has risen, punch it down slowly and you can either bake it into a single focaccia covering your entire pan or 2 medium sized Focaccia or 4 smaller focaccias. (I divided the dough into two equal parts and used just 1 part and froze the rest for later use)
6. Take a 11x17 rectangular sheet pan and place wax paper  or silicon mat on it. Place your dough on it and roll it out smoothly into a rectangular shape  (I dint measure the dimensions of my focaccia, but a thick and roughly rectangular shape is good).  Let the dough rest again for 20 mins .
7. Oil your fingertips and create dimples in the dough. Brush the herbed oil all over generously. 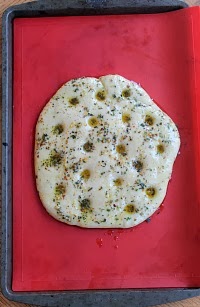 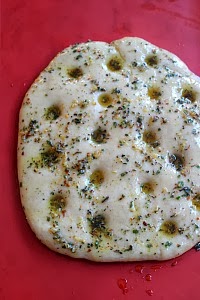 8. Place it into the 450F pre-heated oven and bake for 16-18mins until it is almost done and turning golden brown. I rotated the tray after 10mins, again brushed the herb oil all over and baked for another 6 mins (so mine was done in 16mins)
9. Let the focaccia cool for few minutes , then serve warm and enjoy!

Suggestions:
1. If using Active Instant yeast, you need not proof it separately, just add it along with the flour and other ingredients for the dough with 1 tblsp sugar and make the dough as usual.
2. Actual recipe states to bake for 18-20 mins, but mine was good and golden brown after 16mins so keep checking towards the last few minutes.

The aroma, texture, taste everything about this focaccia was super-duper and both Manish and my lil’guy munched on them as soon as it was out of the oven. Even the mild spice from the red chilli flakes in the herbed oil din’t bother my lil’one. I quickly made a tortilla soup with chicken sausages and we dunked the yummy focaccia in it and ate up almost ¾th of the bread.

My favorite portion of the focaccia were the sides, the crusty bread was simply a delight to munch on. I would suggest you all to give this a try, its really simple and remember, if I can bake bread, then you can too :-)