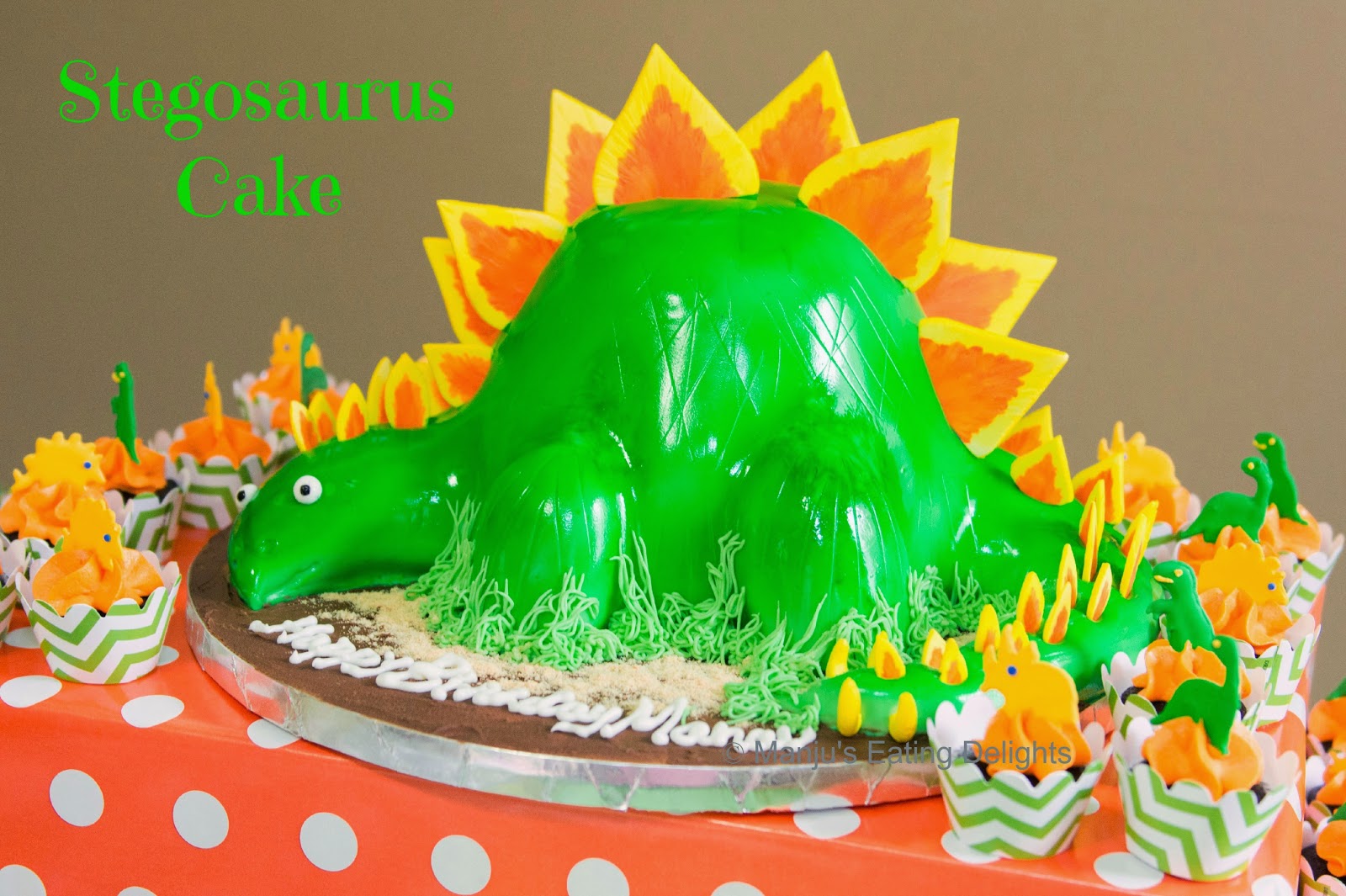 I love experimenting with Appu’s b’day cakes. Because no matter how it turns up I know he’ll love it! I’m a self-taught cake decorator so I love to experiment, specially on the cakes I make for my family. It brings me both joy and also helps me explore various cake decorating skills.
Lil’Appu had a Dinosaur themed party for his 3rd b’day and the first thing he did was ask for a dinosaur birthday cake. Anybody who asked him about his b’day got the reply that ‘I’ll be getting a dinosaur b’day cake’ :-) He was so excited about it and I wanted it to look good.

I decided to make my first ever carved 3D cake in the shape of a Stegosaurus dinosaur.
I’m generally a little hesitant to do carved cakes for two reasons (1) what if the carving goes all wrong? (2) wastage of cake – although you could make cake pops with leftovers.  But I made up my mind this time and went ahead with my plans.

Here’s a simple tutorial with whatever pics I could manage to click while building my dino cake. 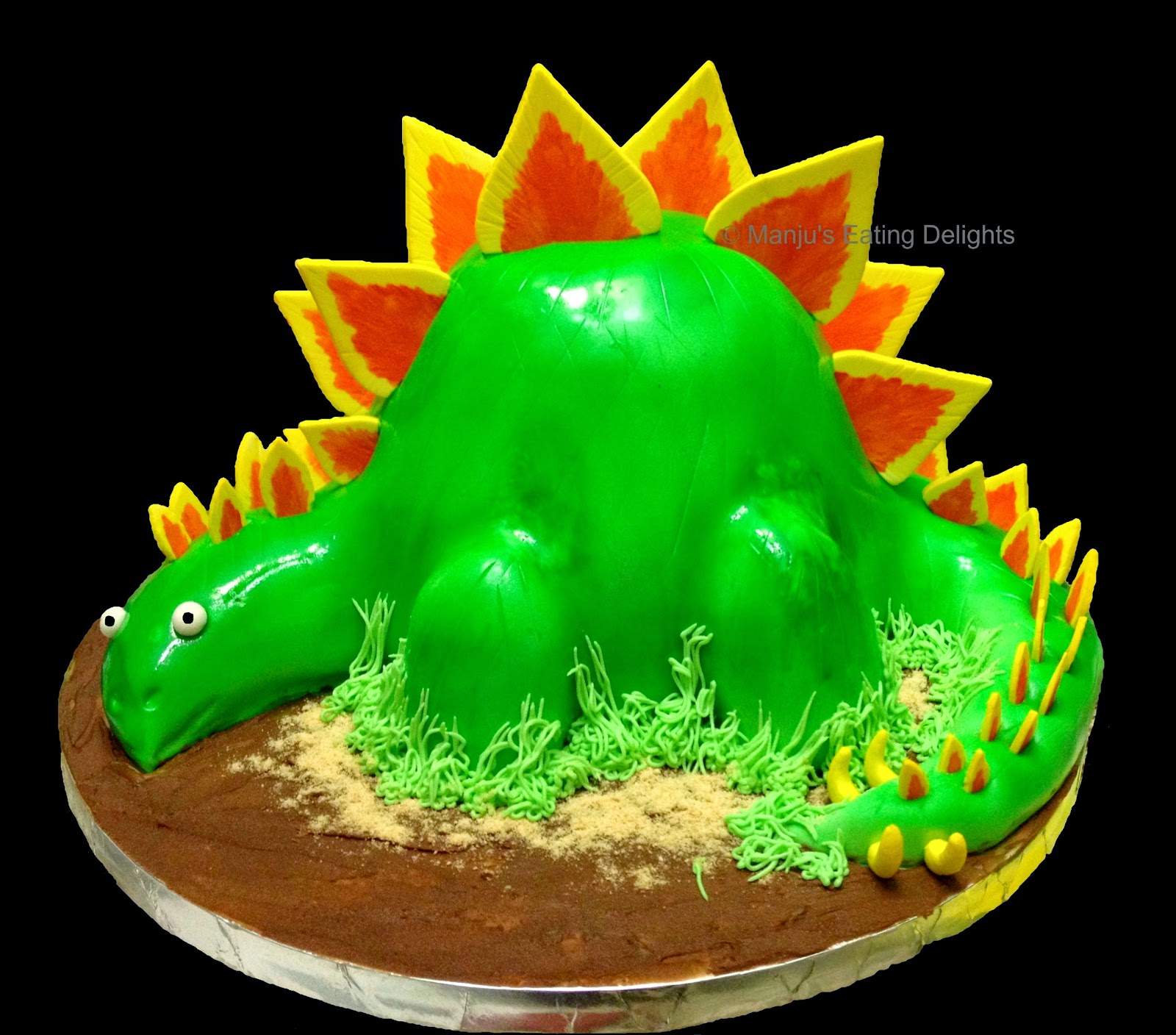 Step 1: Get the Stegosaurus spikes ready

Start with making the spikes for the Stegosaurus atleast a week in advance. I mixed some tylose powder in my marshmallow fondant but you can also use gumpaste for this as the spikes need to be hardened and stand straight on the cake.

I used tear drop shaped cutters in three different sizes and then cut out the end from both sides to get a pointed tip at the bottom -> this will help to insert it into the cake.
The cut out pieces can be either re-shaped or used just as is for the smaller spikes.
Make marks all over the spikes in straight lines to give it a rugged appearance and some texture.  Make several extras incase they break.
Plcae them on a baking sheet with wax paper to dry for atleast 4 days at room temperature. 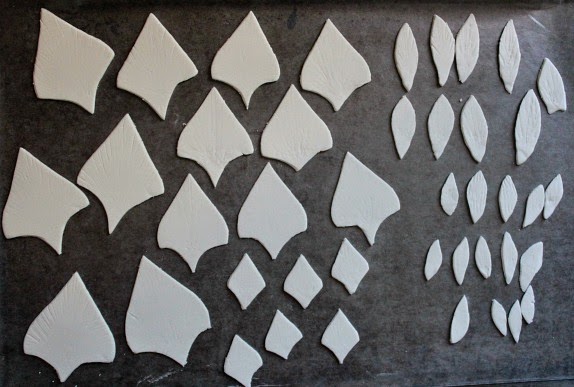 I do not own an air-brush for spray coloring the cake, so this time I decided to give a try at using the Color Mist Spray colors by wilton and it worked like a charm :-) I spray misted the spikes on both sides with yellow and allowed them to dry. Then I painted the orange color in the middle using Orange luster dust mixed in vodka. Do this atleast 3 days before. 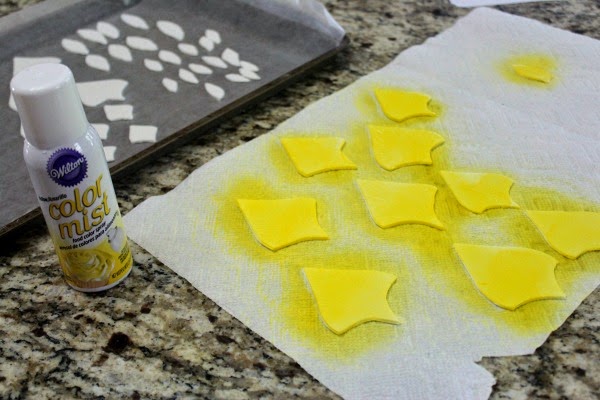 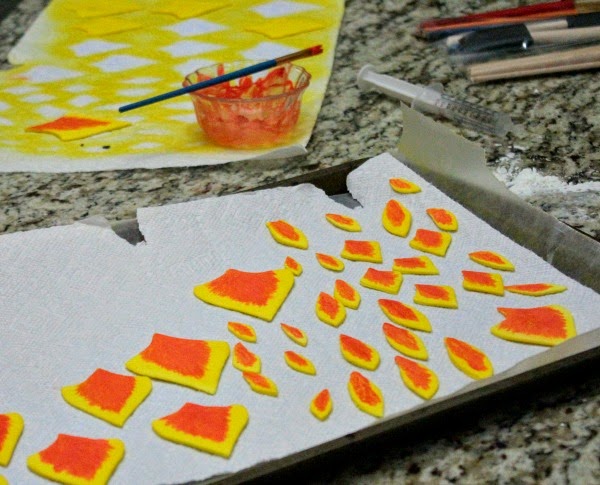 Ideally the body should be more oval-dome shaped than round-domed but I did not have an oval shaped pan so I used my regular round cake pans.
For the body of the dino, I baked two 8” round cakes and one domed round cake in my small glass pyrex bowl.  Made Vanilla Buttercream and stacked them all together like this.

The flavor was a rich Chocolate-Espresso cake with lots of chocolate chips. To get an overall dome shape I gently carved out some cake from the top 8” cake (below the round domed cake) in a downward slant until it blended with the rest of the cake and it finally looked like this. 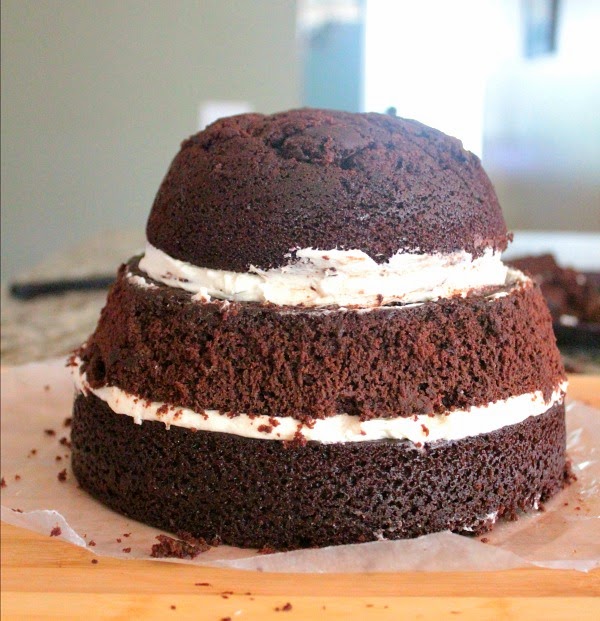 Frost the entire cake with vanilla buttercream. I just did a rough frosting as I was going to be covering the cake in fondant anyways, but make sure all gaps are filled in and the edges are quite smooth. 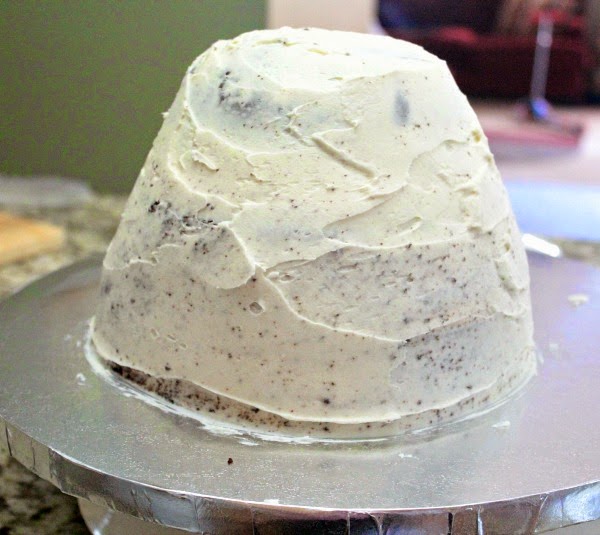 Step 3: Model the head, legs and tail (Can use Fondant, Cake or Rice Krispie treats)

I was planning to make cake-pop mix using the cake scraps after the carving to use for making the head,  legs and tail of the dino.  But I didn’t have to carve out a lot and had no extra cake on hand, so I used some leftover fondant that I had from doing a previous cake. So the Head, Tail and Legs of the dino were made with Fondant.
(You could also use Rice-Krispie treats if you want)

The Stegosaurus head is small when compared to body and is sort of tapered with a beak like mouth.
The two front legs are smaller than the two back legs.
The tail is thick (specially where it joins the body) and its long and tapered at the end. 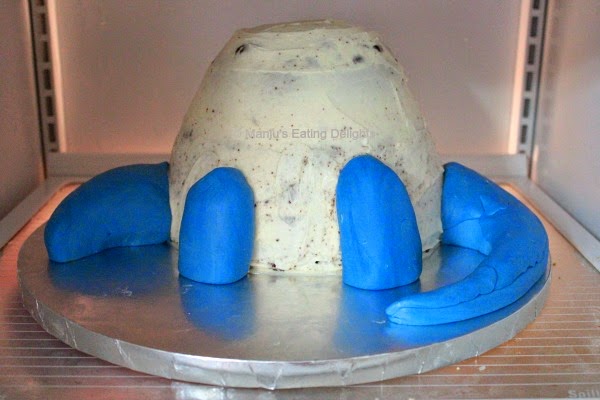 Finally drape the whole cake including the head, legs and tail in fondant (I kneaded my fondant light green while making it) and trim away excess fondant.

Using a ball tool make holes for the eyes, small nostrils and make a shape for the mouth.
Again make vertical markings all over the body of the cake, the tail, head everywhere, to give it some texture and a scaly bodily appearance. Take care to not tear the fondant though. 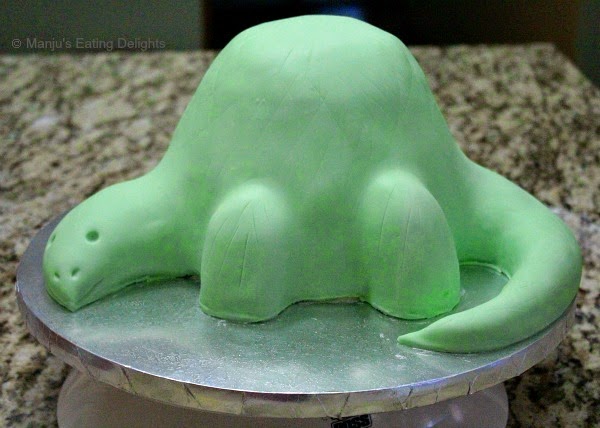 I then Spray Misted the cake with Green :-) Let the cake dry out at room temp for 1-2 hrs.

Step 5: Place the spikes and give finishing touches

Now add the spikes on the cake body.  Starting with smaller spikes on the head, then bigger spikes in the center and smaller spikes again towards the tail, ending with pointed spikes at the end of the tail. I had to make small cuts with a knife to help insert the spikes into the body without breaking the spikes.
I made two small white balls for the eye-balls and used an edible marker to add the black pupil for the eyes.


Finally the finishing touches:
-- The cake board was coated with Chocolate buttercream for a muddy appearance.
-- Green grass  (vanilla buttercream colored with green) was piped all around the dino-cake to make it look as if the dino is resting in the grass. Used Wilton grass tip 233 for this.
-- Crushed graham cracker biscuits resembled sand and I added that all around the dino near the grass. 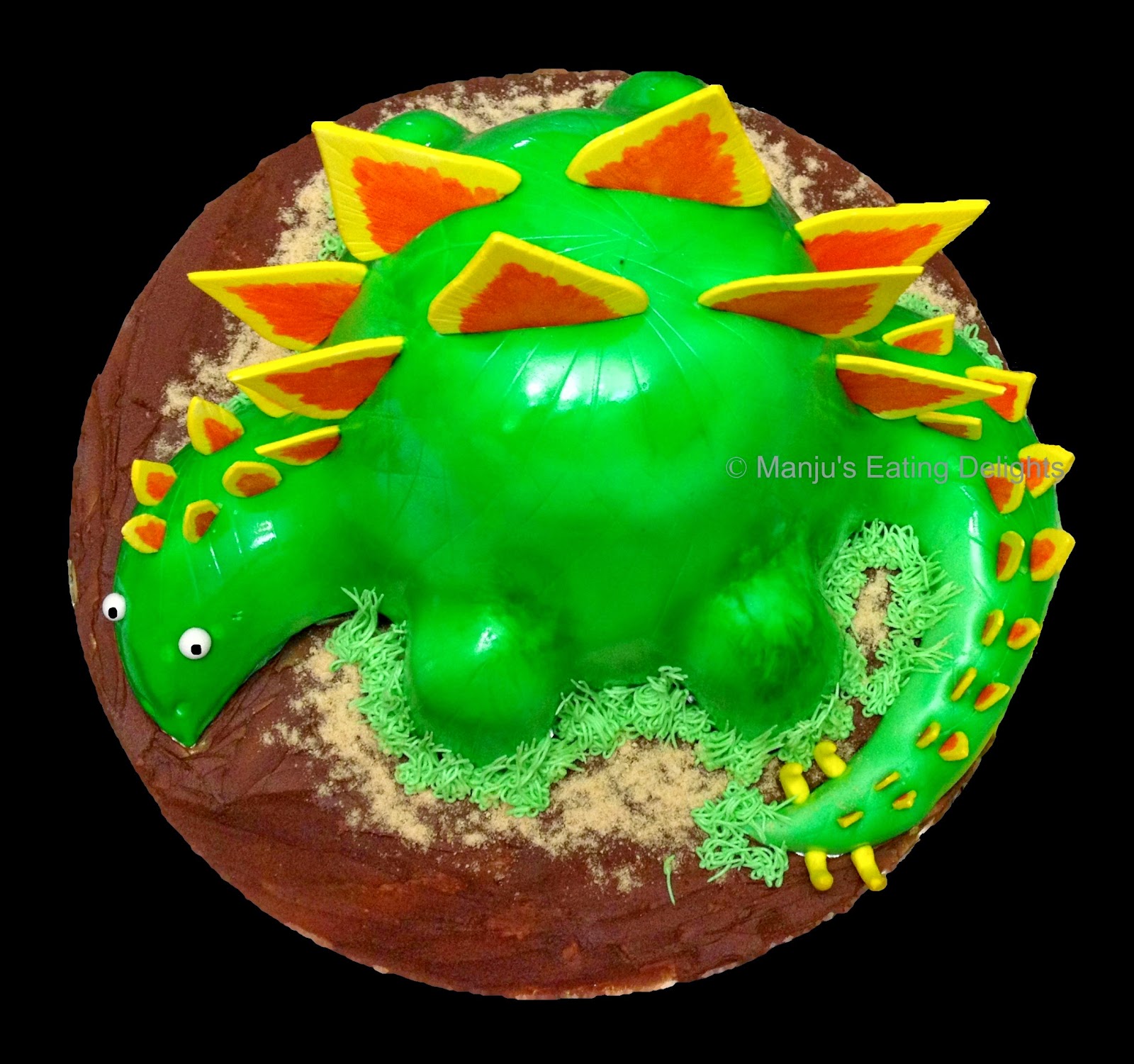 Just before the party I used some royal-icing to write ‘Happy Birthday Manav’ on the cake board. And this is how it looked. 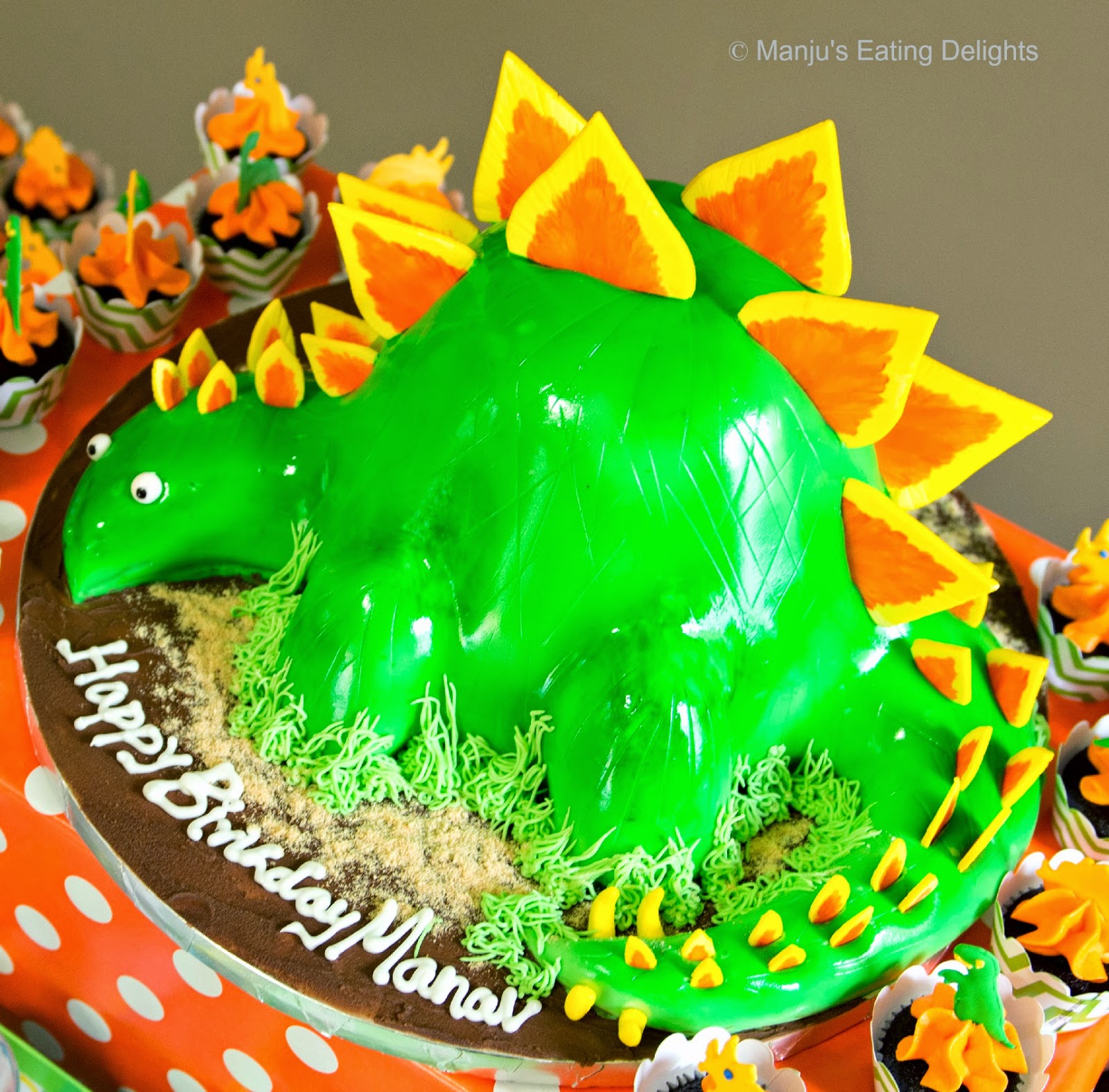 The whole inspiration behind this dino cake was a tutorial I saw of a Stegosaurus cake by Montreal Confections and I just couldn't get it off my head :) so even though I was planning a T-Rex cake I finally decided to do a Stegosaurus with the pretty spikes on its body. 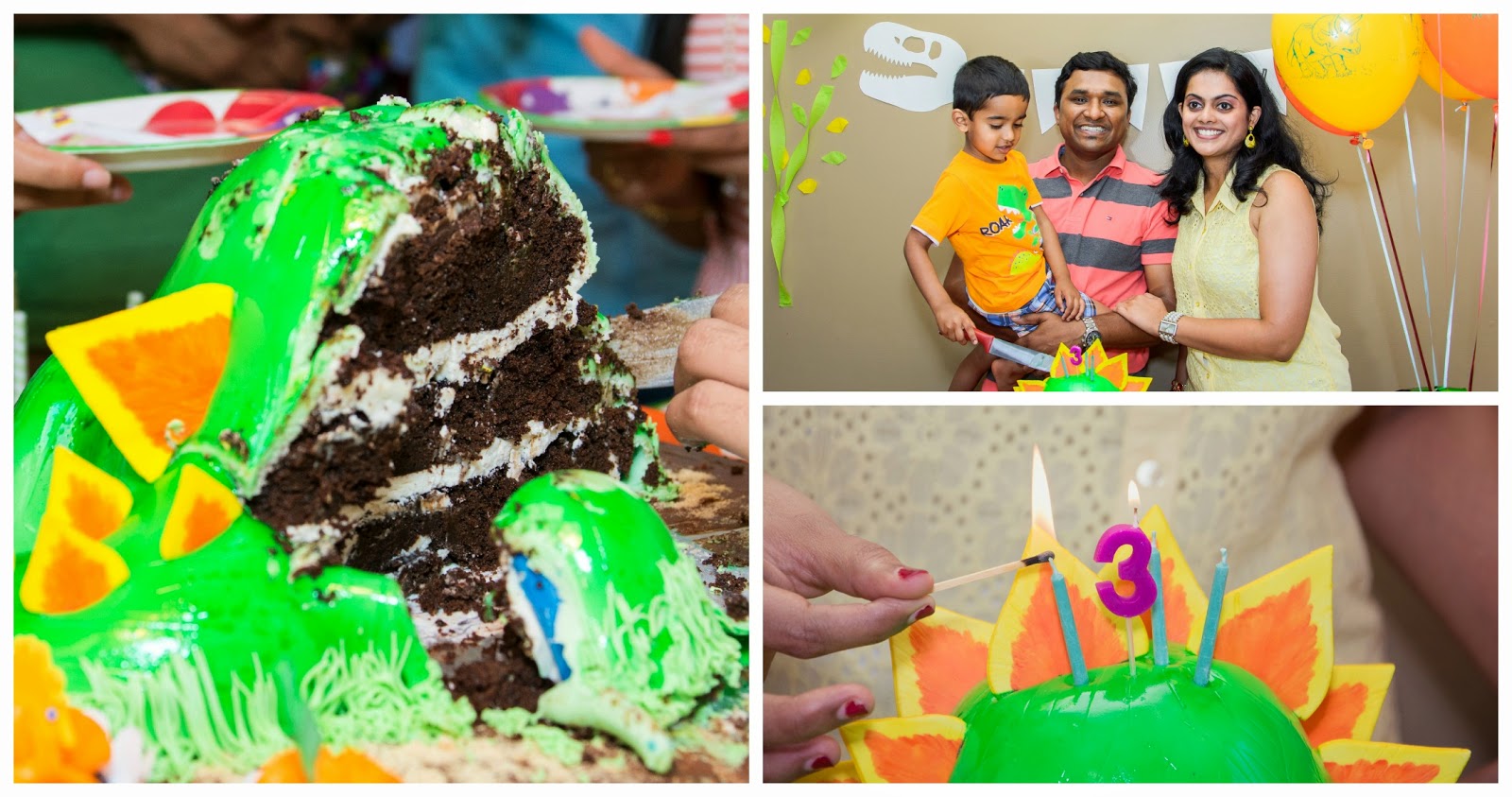 Hope you liked the tutorial and I must confess this has been the easiest cake I have done so far. Even the detailing was pretty simple. If you ever make a dino cake please do share it with me. Would love to see your creations.