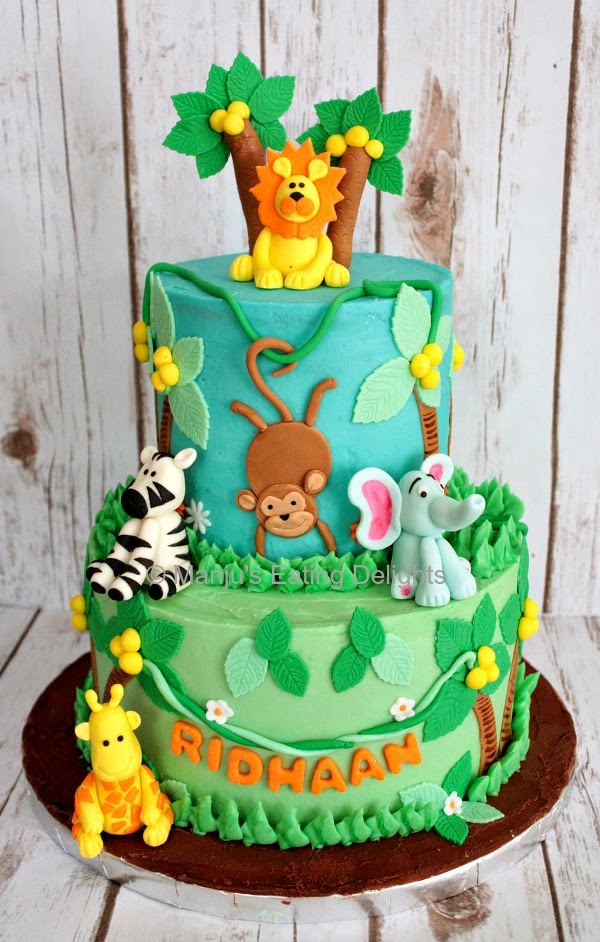 I'm so excited to share my first cake this New Year....a super fun, extremely cute and bright Jungle Animals themed tiered cake. Ridhaan's mom is my very good friend and she had asked me to do his birthday cake many months before. Although I wasn't sure if I would be able to make it (due to some other matters) I finally decided to go ahead. Her only request was for a Mango Mousse filling and some animals to go on the cake to match with the Animal themed birthday party she had in mine. Rest all was left to me and sky was the limit....

I'm proud of this cake for several reasons.
(a) This is my first non-fondant tiered cake with a smooth fondant-like finish. It took a lot of time to get the sides smooth and edges straight but it was worth it. There were some imperfections but let's say I decorated over them...hehe :-P These are very important factors in the word of beautiful cakes so it mattered a lot to me as well and I'm glad it worked well.
(b) This was my first tiered cake with a creamy Mousse filling. Mousse fillings are generally very soft and people don't recommend them for tiered cakes or even for cakes that need to sit out for a long time. But I tried it and it worked fine. Maybe I should thank the freezing temperatures here in Minnesota for that!
(c) My first cake with actual sugar figurines that you can eat! :-D

Until now I've never really tried making edible figurines, except for the Clowns I made for Lil'Appu's 1st Birthday Cake. Usually I just keep a plastic toy topper or a themed candle topper and just decorate the rest of the cake. But this time I felt with the animal theme it would be great to have some cute looking animals on the cake, so I went ahead with making them.
I made a Giraffe, Zebra, Elephant and Lion. I wish I had made the giraffe neck longer, but other than that I was happy with the rest of the animal figurines. These were made almost a week in advance and they hardened perfectly. 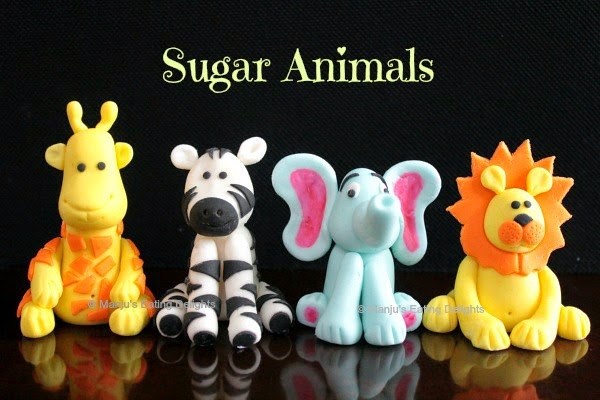 My son used to come back daily from daycare and go stare at the animals...he just loved them. He is so used to me making cakes for friends that he doesn't touch or disturb my 'cake stuff' and for some reason he thinks he can go for the party anyways and eat the cake and decorations there (which is usually true)...so after the cake is cut its a whole different story, he wants everything first ;-D
He kept requesting that I make a Monkey as well and I told him we'll make one directly on the cake. I don't know if he understood, but he kept waiting for the monkey every single day :)

The Tree toppers were a last minute addition. After I placed the animals on the cake with the Lion on top I just felt it needed something more...I thought about placing a Sun, but then the colors of the Lion and sun would be almost same (yellow-orange) , so finally decided to place the same trees that I had placed around the cake. Well, you can call them Coconut trees although the leaves should have been longer ;-) It's all in the imagination....hehe! If you notice I even gave small scale like texture to the stem of the tree to give it a proper 3D tree look. I decorated the cake board with chocolate buttercream to give it a muddy ground like appearance and it looked pretty good.

Then there were vines, some grass, more leaves, coconut trees and flowers to complete the overall look of the cake. I wanted the Monkey to be hanging from the tail on a vine and that's how I did it. 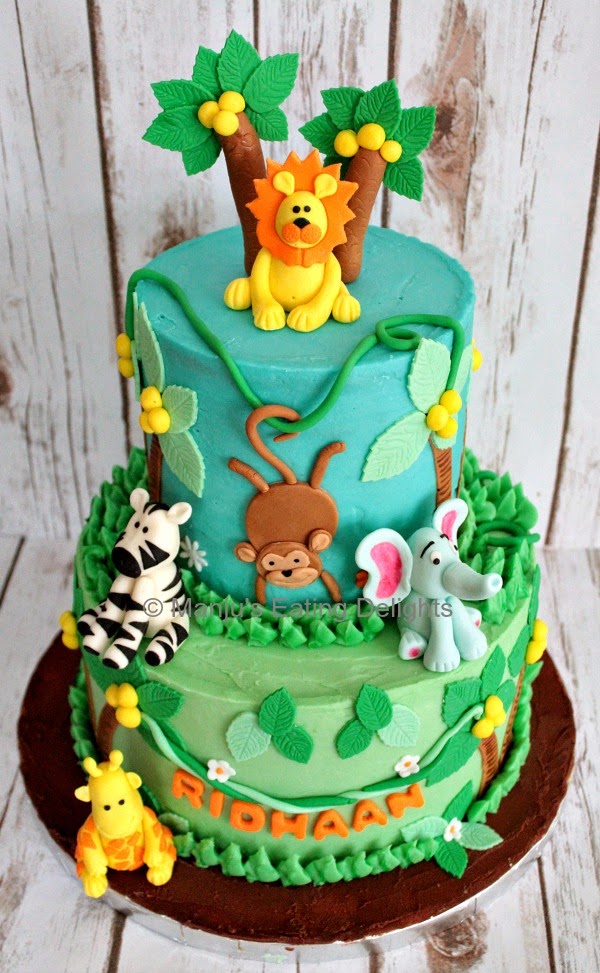 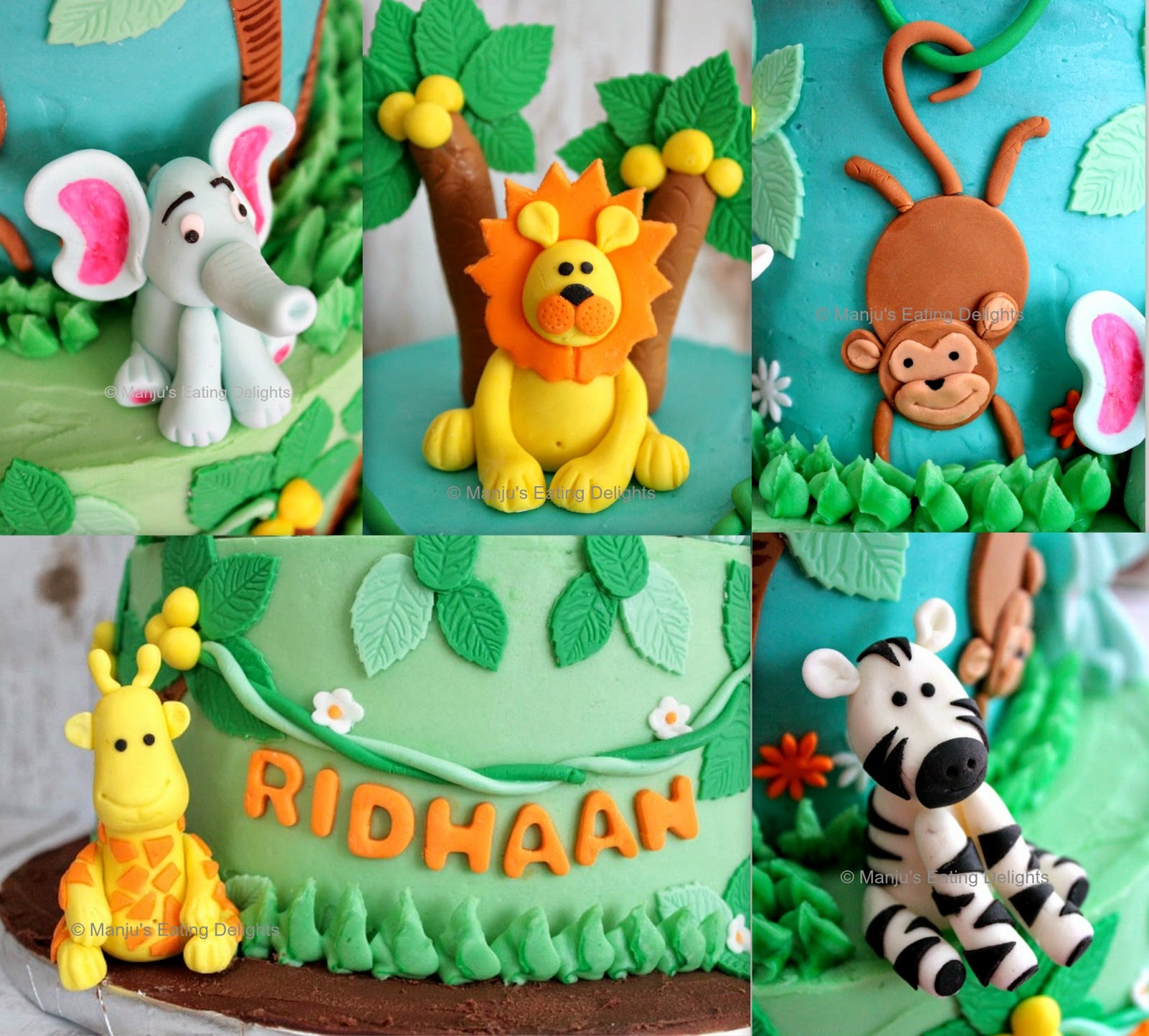 My friend had already bought the candle that would go on the cake so we placed that at the venue. Here are some pics of the beautiful Cake Table and cake cutting :) 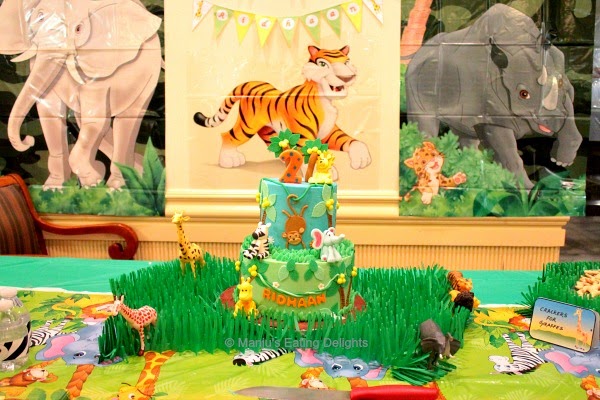 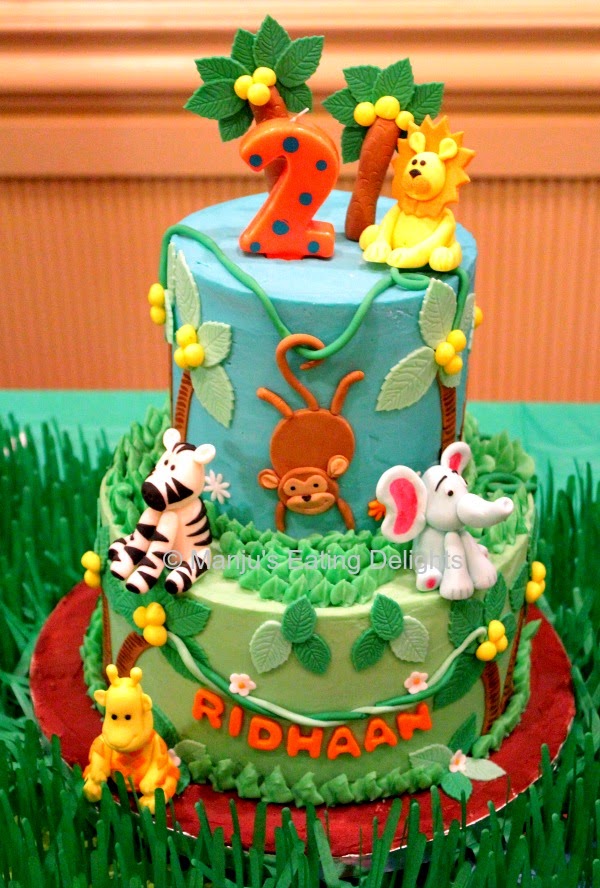 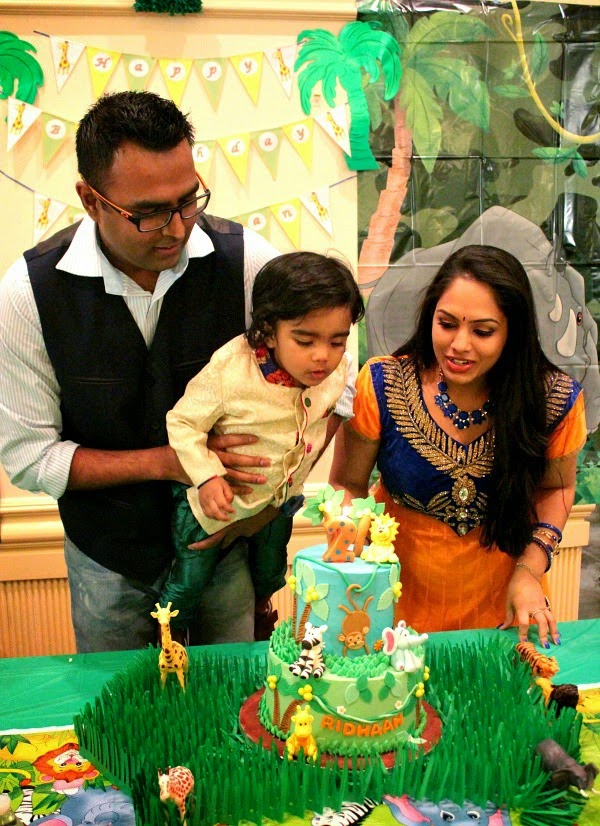 Here's how the cake slice looked like! It really was yumm if I may say so.....ahem! 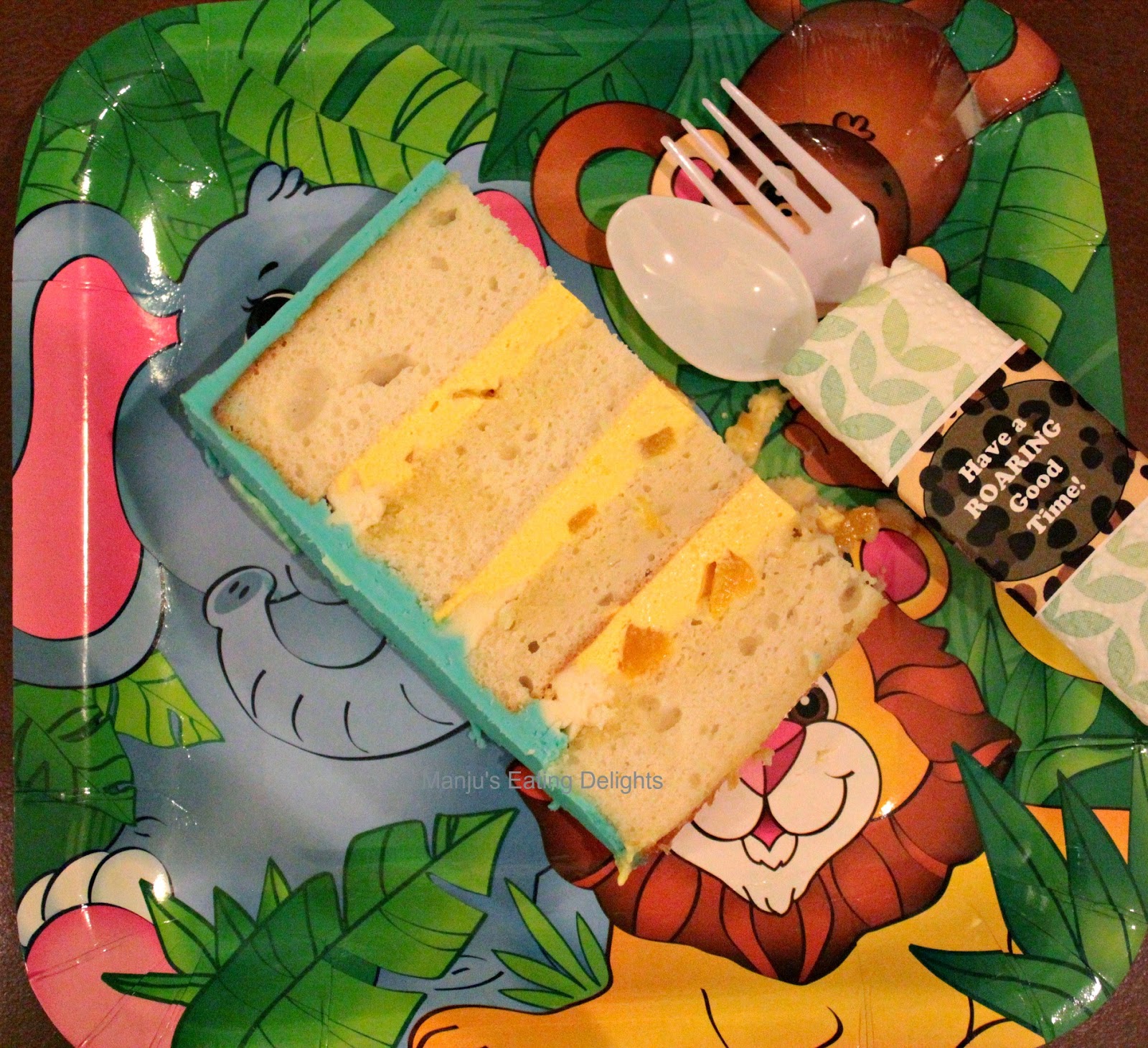 I'm still waiting for some more pics that the photographer at the party had taken....I'm sure my friend is waiting for those more than me :-P
The party was super fun, the decorations were perfect and colorful and the food was awesome and not to mention how lovely the cake was...hehe!
Lil'Ridhaan happily ate up the sugar Elephant and lil'Appu went for the Lion, but I don't have pics of any of that...hopefully the photographer took some :)