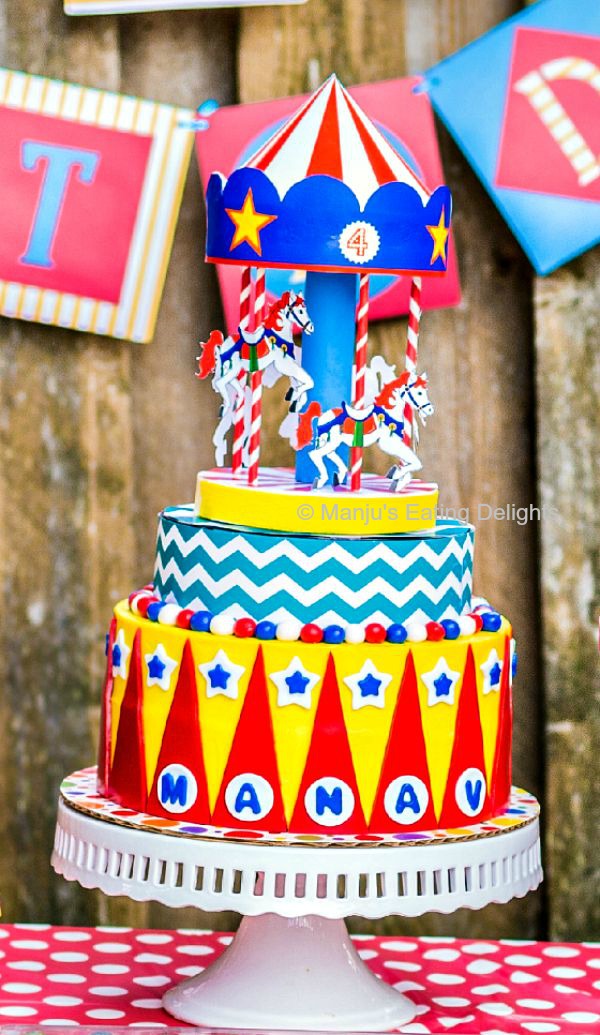 I know we are deep in Fall right now but I love to remember the warm n sunny summer we had this year. My sister and her hus came over to visit us for a whole week 1st week of July and then Manish’s parents stayed over with us for 2 whole months and later his sister and family with their 2 month-old baby boy, Dhyan came over and stayed for a month. So we had a lovely family time throughout this summer and my lil’Appu couldn’t have been more pleased with so many people to pamper and play with him. He loves his lil’nephew and always tells everyone he meets that he has a brother…Awww!

Manav, my lil'Appu's birthday falls on July 11th and this year his grandparents were here with us on his birthday and we wanted to make it a special one. 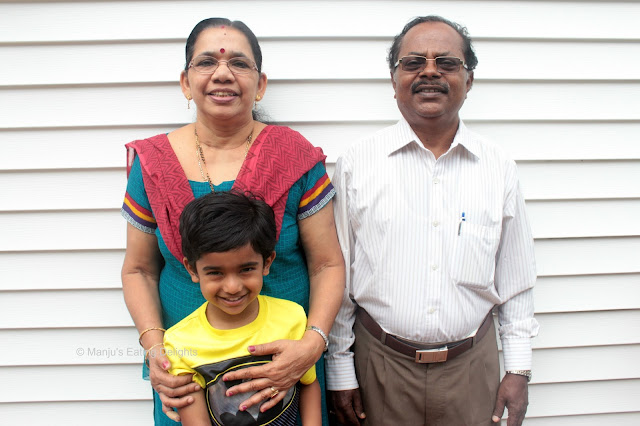 Having a summer b’day is so much fun and we love keeping outdoor parties. We decided to do a colorful Carnival themed birthday for him this year with a whole bunch of games which the kids actually had to play to win their Prizes ;-) I’ve shared a full detailed post on the fun birthday party here. 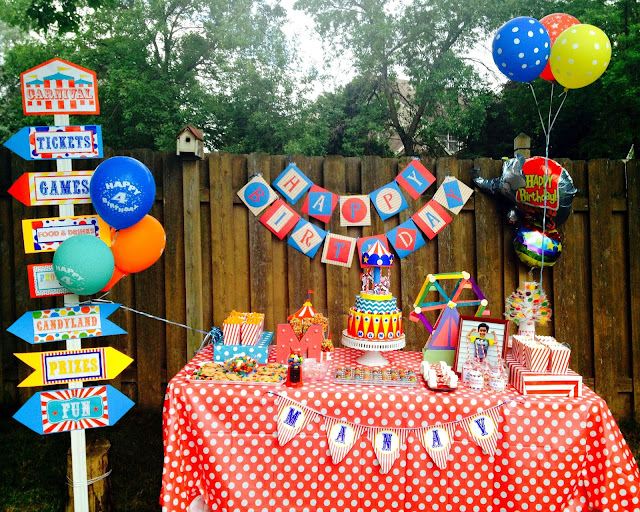 Let me mention in advance that this is not a recipe post. It's just a post where I'm bragging about how we managed to make a rotating carousel cake and me trying some Ganache techniques...Lol! If still interested read away....

The first things that come to my mind when I think of a Carnival are Carousels and Ferris wheel rides. After going back n forth with what sort of cake to make, I decided to do a Carousel cake. I have earlier once made a Carousel cake for a girly birhday but my boy loves carousels too, so I decided to go with the same plan. My friends agreed to help make a Ferris Wheel to add to the cake table décor, so I was just thrilled. 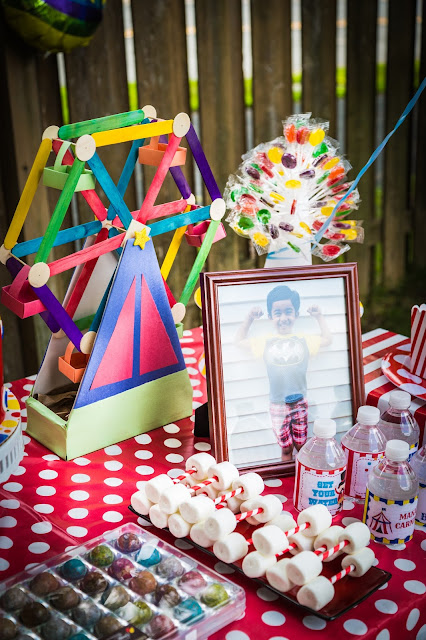 Now if you have been following my blog for a while you know only too well how I love to go a bit crazy with my cakes :-) I had bought a rotating turntable a while ago to try an experiment on making a moving cake…u know a 4D kind of cake.

I did not make a tiered cake, nor did I want to spend a lot of time making the carousel edible. So I converted the rotating turntable to act like a second tier and completely constructed the carousel on top using Styrofoam blocks and printed paper. Each horse on the carousel is hand cut out…I must say all that cutting made my fingers quite numb! 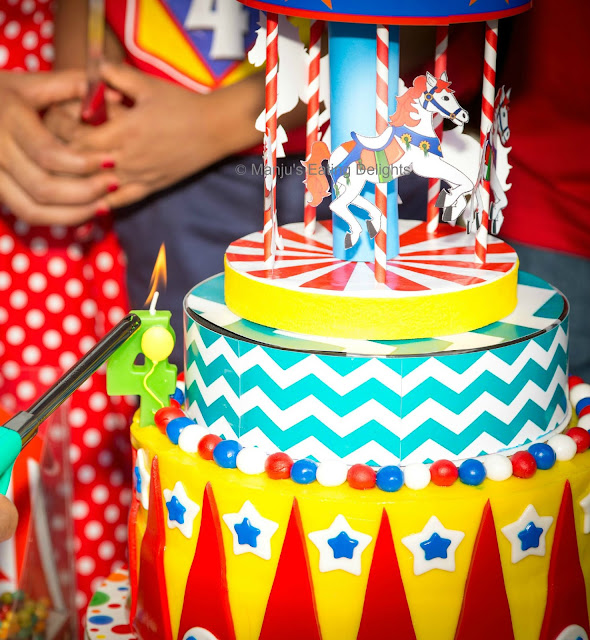 I spent quite a lot many days getting the right designs designed up on my laptop and then printed out for the carousel and cutting them up and sticking it all together.  As he was turning 4 that was printed out on the top portion of the carousel.
We wanted to place a flag on top of the carousel tent, but that did not work out well.

The picture shown below shows how exactly the carousel parts came together. The first pic is the initial portion of the carousel and this was stuck onto the rotaing turntable which was covered with a Teal chevron patterned photo paper...I loved using photopaper, it was shiny and glossy and kept its shape. The conical carousel tent, horses and the bunting around the cone are all done using photpaper with deigns I made and printed out. 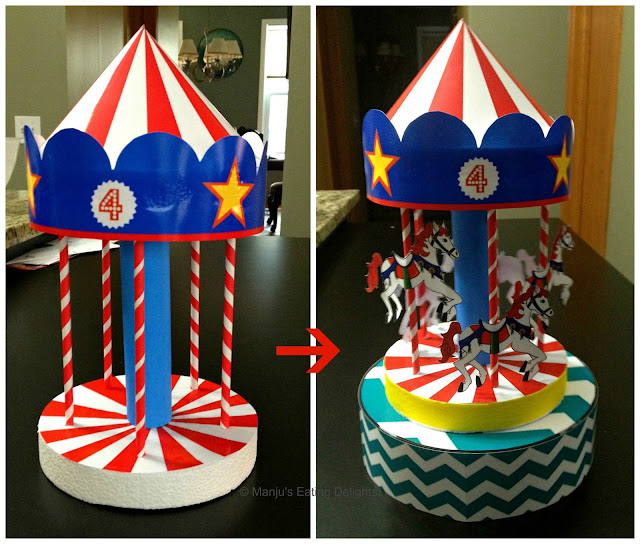 Appu was sitting beside me all the time while I worked on the carousel and he was quite thrilled. He was more overjoyed when I started the rotating turntable….he kept saying, “look mummy, the horses are jumping!” ;-) Yaaay! we had a rotating home-built carousel!

Now the only thing left was to bake the cake and ofcourse decorate it. Since the theme was about being colorful and fun and we already had the carnival element(the carousel) to go on top of the cake, I decided to make a colorful Polka Dot inside surprise cake. 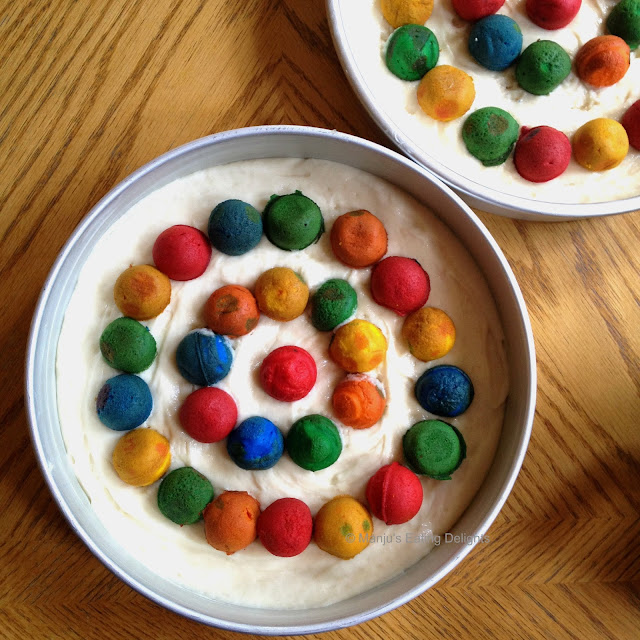 The Polka dots were actually colorful cake balls which I was able to quickly make thanks to my electric cake ball maker. This gadget was a time saver I should say and was a cheap Thanksgiving purchase.
I went for fun, bright and boyish colors (if you can say so) – Red, Green, Yellow, Blue & Orange.

Once the cake was baked and cooled, I filled it with Vanilla Buttercream and frosted using yellow colored White Chocolate Ganache.

Colored ganache is a big rage these days and a really nice option for those who do not enjoy the taste of Fondant but still want a really neat and smooth finish for their cakes. So I’ve always wanted to try this technique and it was a breeze I should say and I loved the end result and besides it tastes like white chocolate, what’s not to like about that! I used a premium quality White Chocolate and it set up beautifully.
Oh! And I tried a method called the Upside-down technique to get straight edges around the cake. Have to say I did not like the idea of having to flip my heavy cake up and down, so I’m not a fan of this technique and will have to try something else to get those neat sharp edges.  (Only a cake fanatic would understand all the things I just said in this paragraph…Lol!)

The decoration was so simple, all I had to do were cut out triangular red colored Fondant strips that was the same height as the cake and align then around the cake.
I cut out Manav’s name and placed them in round fondant circles.
Finally I placed the carousel (with the rotating turntable) on another cake board which was then placed on the cake and decorated around the cake board with colorful fondant balls.

The pic below makes the cake look lopsided as the the table itself was sitting on a downhill portion of our backyard :-P 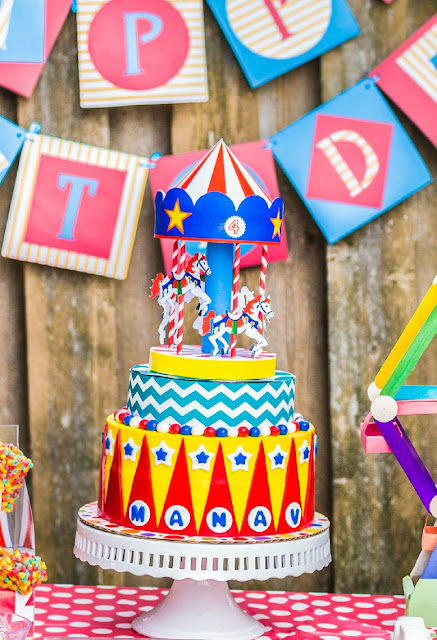 And thus my Roating Carousel Cake just rotated away the entire time it sat out at the party and I have to say it was quite the center of attraction!
Here's a fun little video I made showing the rotating cake and the cake table decoration and the games we put together! Hope you enjoy watching it. It's my first attempt at making a video, so your feedback is highly valuable :-)