You are my Sunshine themed Birthday | Mihika turns 1 and Manav turns 6! 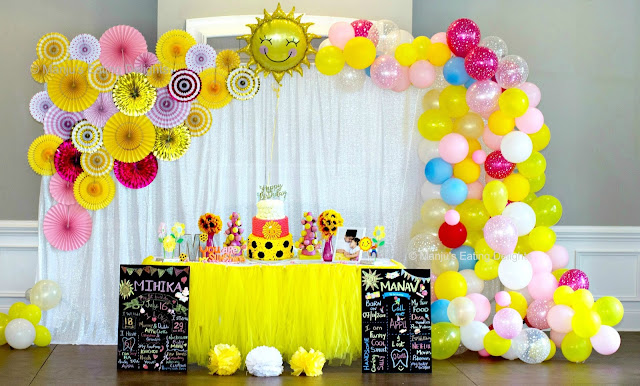 P.S: This post was long due. Its 2018 now, but I'm sharing one of our biggest birthday parties of July 2017 for our little ones...hope you enjoy the details just as much as we did putting it together!

Our little bundle of joy, our baby girl Mihika turned 1 year old last July 16th, 2017.  Her name, Mihika means ‘the Mist’ or ‘Dew drops’ and we call her Mihi baby or Mihi at home. Her older brother Manav (Appu), simply adores her and she’s the first person he asks for when he doesn’t see her around.
Mihi baby's first words were 'Appu chetta', so i know they both are meant for each other :-) She gets super excited when Appu chetta is around and at times gets annoyed when he runs around and she cannot catch up.


Both Manav and Mihika share July birthdays and although Manav had his own little Pokémon themed 6th birthday party, we decided to combine both of their birthdays and throw a grand birthday bash last year.
I remember thinking of a Sunshine themed party when Appu was 1 year old, but later went for a Rainbow themed party instead, which was just as colorful and fun.

‘You are my Sunshine’ is a wonderful theme for little girls and boys and can be customized as per our wish. As I wanted to highlight our baby girl’s 1st birthday, I used some pink color in the décor apart from lots of Yellow and White. Appu did not care for the colors used in the décor, his interest was in the cake cutting, magic show and piñata that was planned as part of the celebrations. He kept telling everyone he has a sunshine birthday coming up and was really looking forward to it.

This party took several months of brainstorming and planning and I want to discuss each detail of the party one by one :-) Long post ahead, so I've tried dividing each category and added lots of pictures to enjoy the details.

Sunshine Decorations
Big colorful backdrop, sunshine cutouts, giant Sunflowers and lots of balloons and other decorations in the shades of yellow, white, pink and grey formed the main base.

A lot of the decorations were bought from Walmart, Party City or Dollar store or ordered online from Amazon. Plenty were handmade. It was a whole lot of effort to get the exact items we needed whether store-bought or home-made. 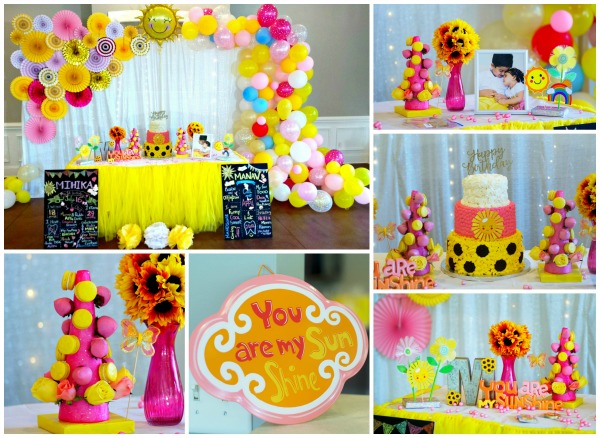 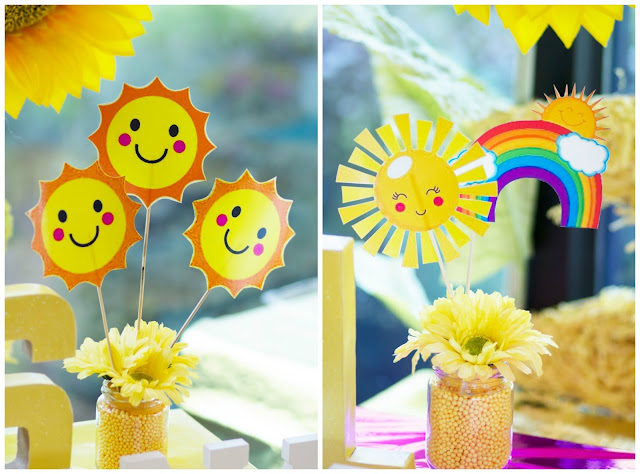 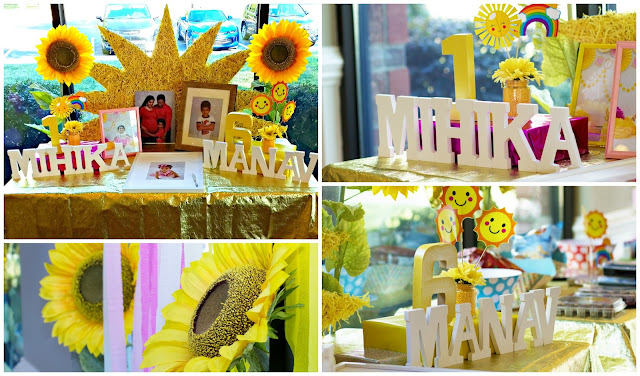 The entire ceiling was decorated with hanging ball and honeycomb lanterns and it looked beautiful :-) 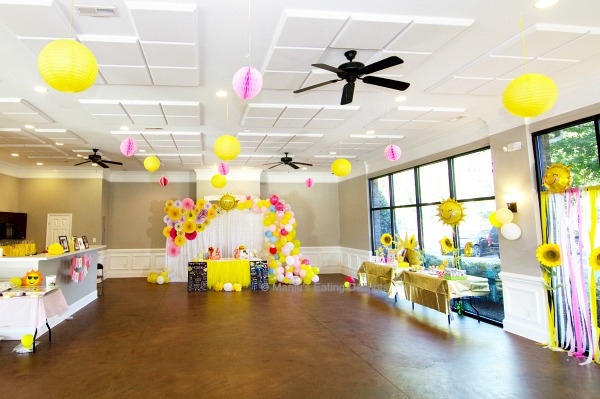 I have always wanted to try a backdrop with Pinwheels and I absolutely love Balloon arches, especially fancy balloon arches, not the usual U shaped ones.
After going over millions of party backdrop pictures on Pinterest, I decided to do one that included the best of both, so Pinwheels on one side and a giant Balloon arch on the other side with a white backdrop which would allow the colors to pop out.

After making a rough sketch on my laptop with the colors I had in mind, we decided this is exactly how it should look and it was the template for our backdrop.
As the color for the décor was mostly Yellow, White and Pink, we bought Pinwheels in those shade and some metallic ones for a burst of color.

For the balloons, the colors ranged from sunshine yellow to golden, light pink to sparkly pink, clear transparent ones and some blue. The backdrop was a sequined white curtain and the pinwheels were places to the left and balloon arch to the right.

We bought the frame and put up this entire backdrop ourselves and it took Manish, my dad and several other friends help with blowing balloons, cutting tape, using a fishing line to set up the balloon arch and all kinds of other small details to put this up.  We were mighty proud of the end result…what do you think? 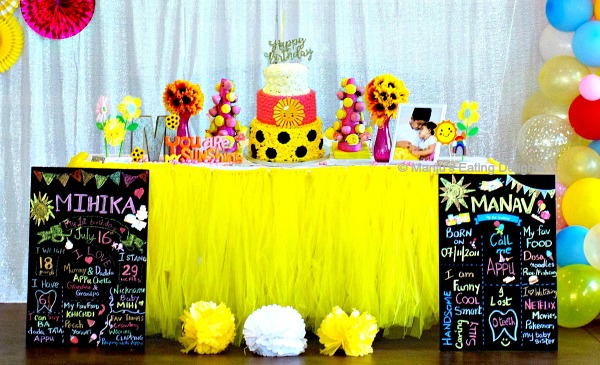 Several details went on the cake table. There was the cake ofcourse....but lots of other cute details. We used tulle table skirt to match with Mihi baby's tulle frock.
Daddy was a huge help for all the preparations. Almost all the different sunshine cutouts, number cutouts and several other mini decorations some of which never made it to the party were done by him over several days.

We bought the 'You are my Sunshine' lettered block frame (which was perfect for the table) from Walmart.
The sunflower ball on top the the pink vase was fully handmade by pressing sunflower heads onto a round thermocol ball. It wasn't easy to get so many similar plastic sunflower plants. 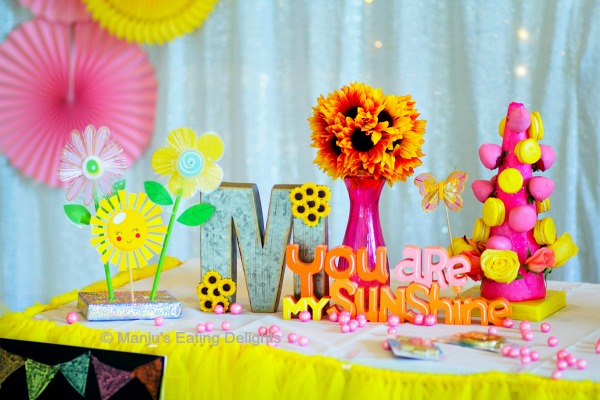 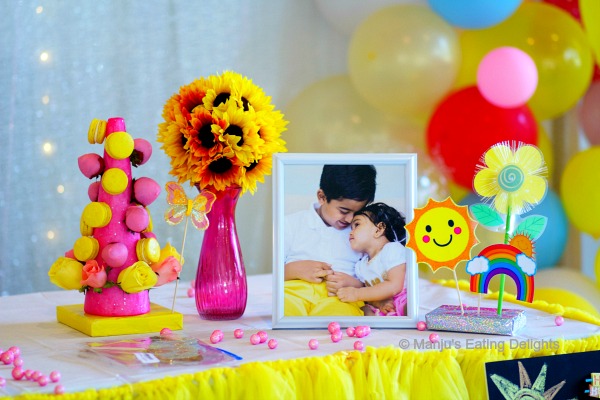 Another thing I've always wanted to do : Chalkboard's :-)
We got black foam boards for this and each one had a special chalkboard to themselves. Apart from the writing, we stuck some 3d stickers for some fun effect. I don't remember the last time i drew with chalk and it was so much fun to do this. 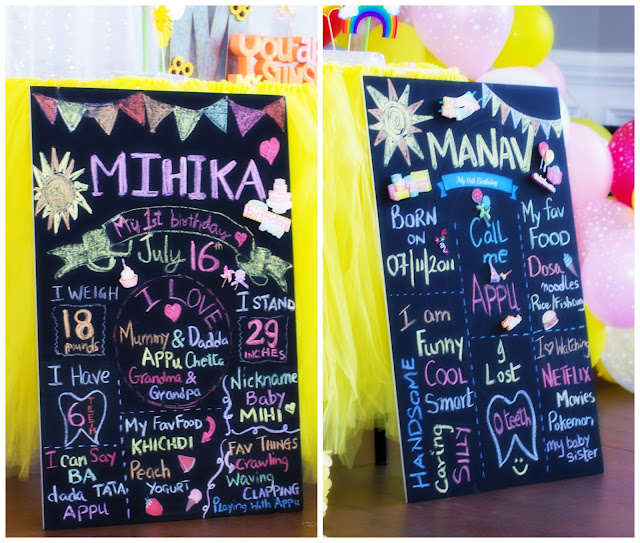 A separate table was arranged with both Manav and Mihika's photographs and some fun details like wooden blocks that spell their names, sunshine cutouts and standing number 1 and 6 frames that were actually cardboard frames over which my dad cut and stuck shimmery yellow cardstock sheet.

For the kids photo-table, I wanted to create a large sunshine backdrop and got cardboard and yellow paper shreds for the same. Again, my awesome daddy cut and stuck the whole thing and brought it to life. It formed a beautiful backdrop for the table along with some giant Sunflowers. 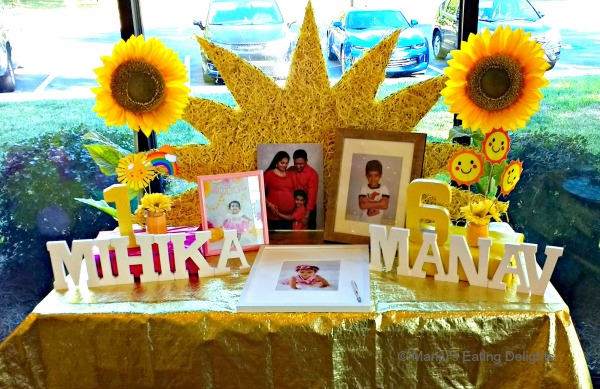 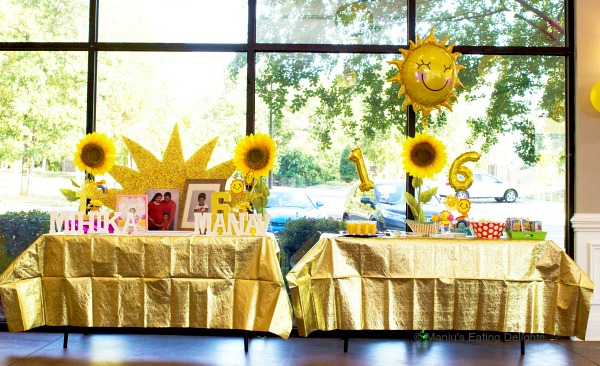 A large frame with Mihi baby's picture was kept at the photo-table for guests to write a wish or note for her on her 1st birthday. We had done the same for Appu's 1st birthday and it's a nice little souvenir for them to look at later. 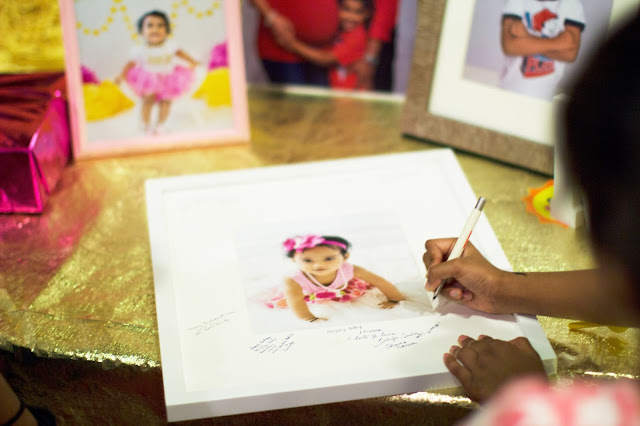 Sunshine themed snacks and treats
A separate table for snacks and small eats were set up, mainly for the kids.
I decorated some Lemon Oreo thins to look like sunshines, made Mango mousse cups, Pink and Yellow Cake pops and Yellow cardamom flavored Macarons which I used as part of the Strawberry-macron tower.
There was also potato chips, mini chocolate treats , fruit salad, veggie salad and CapriSUN juice as part of the snack table. 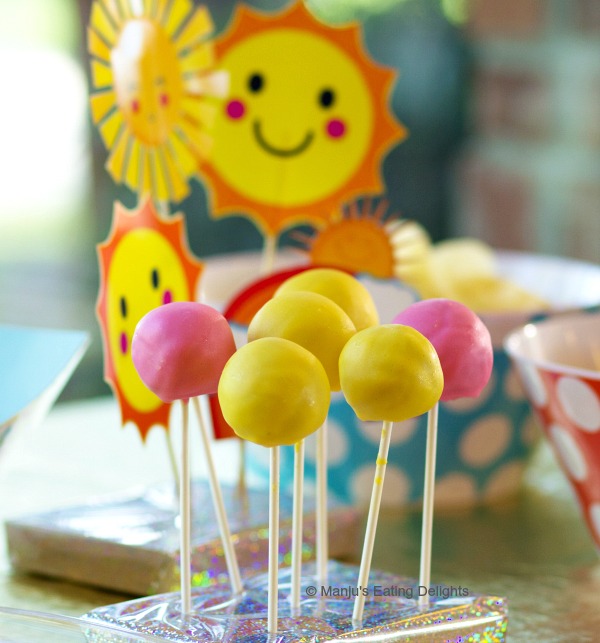 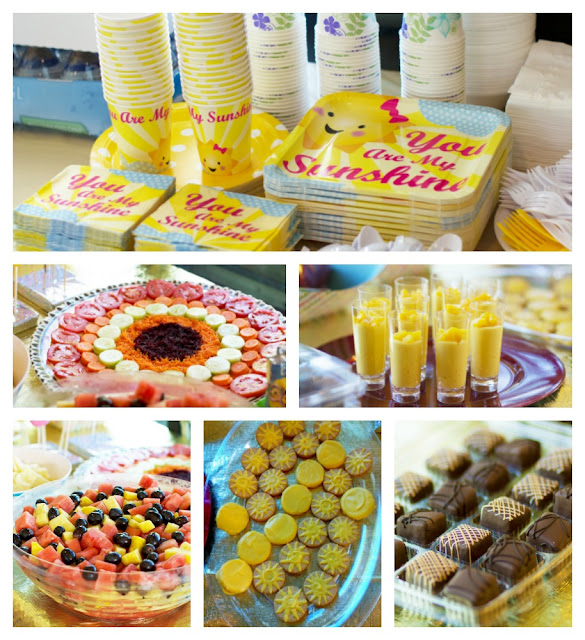 And yes! I made macarons for the very first time. It was my second try ideally and although it wasn't a perfect batter (had small lumps), they formed feet and looked quite good. Some of them were hollow but tasted good nevertheless.
They were cardamom flavored macarons tinted yellow (to go with our Sunshine theme) filled with sweet vanilla buttercream. 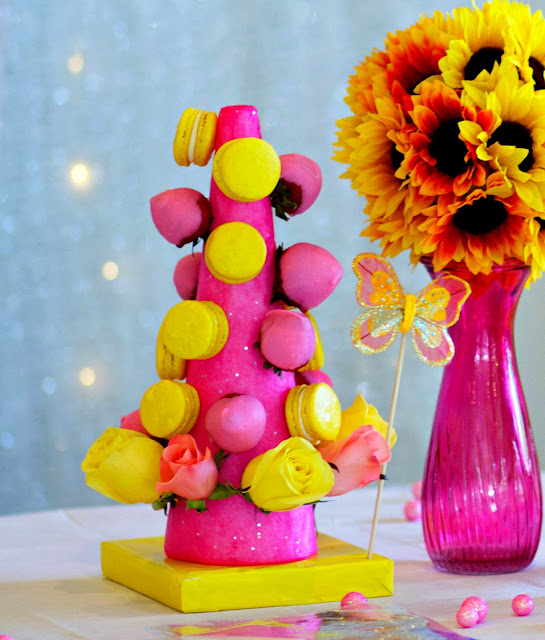 I also prepared some  chocolate coated Strawberries and used them to form a Strawberry-Macaron tower with pink and yellow roses. They formed a pretty centerpiece on either side of the cake on the cake table. 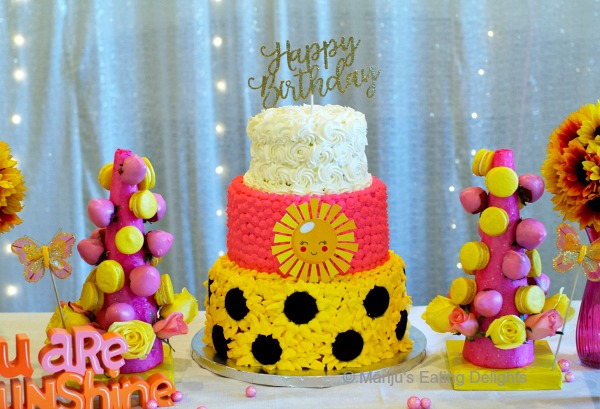 For the Cake, I was toggling between whether to keep 2 cakes as it was for two birthdays or one large tiered cake. After lots of confusion and brain storming, we decided to keep just 1 large cake as Appu had already had his own special birthday cake.

A glittery Happy Birthday topper and a cute smiling sunshine cutout added the final touches.
We used 2 golden candles numbered 1 and 6 to represent each birthday kid before they cut their cake. 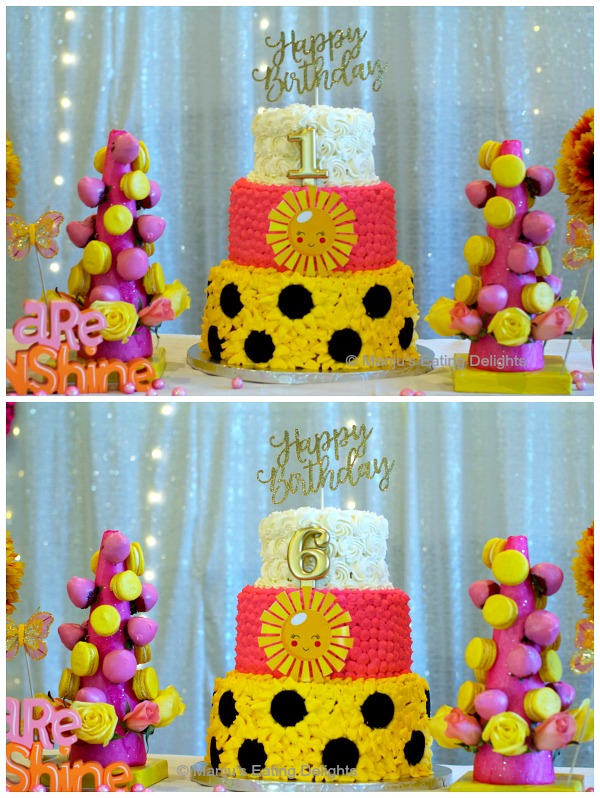 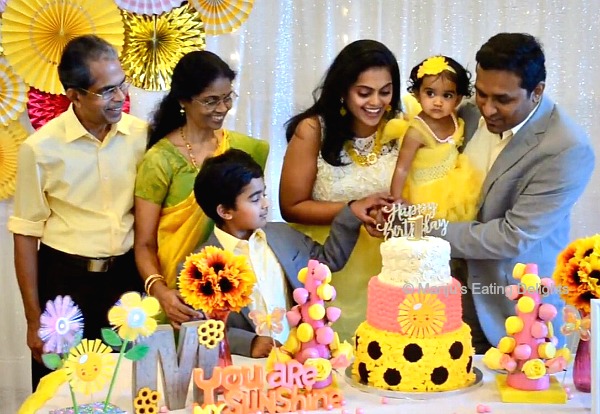 Cake cutting was really fun. All the guests had arrived on time and Mihi baby was in a good mood. We first placed a number 1 candle and Mihi baby cut her 1st Birthday cake…woohoo!! She had just eaten a bowlful of khichdi , so she wasn’t very hungry to take a bite.

Next, the number 6 candle was placed and Appu insisted on cutting the cake himself. He did a great job and took a big bite as always.

My beautiful sunshine princess was all dressed up in a gorgeous sunshine yellow tulle frock. The dress was custom made, very comfortable and she wore it throughout the length of the party.  To try and match my little princess I decided to wear a yellow tulle floor length gown.

Appu wore a suit for the first time and although a bit hesitant at first he agreed to wear his suit and shoes as long as his dada also wore one. So they wore matching gray suits with mild yellow shirts and looked a handsome pair. And the color combo went very well with the song, ‘You are my Sunshine, my only Sunshine. You make me happy, when the skies are Gray!’

Grandma and Grandpa also wore shades of Yellow, so in all we were all in sync with the theme. They both made sure the birthday girl was eating and drinking as per her schedule, which really helped as she was very calm and composed during the party although very curious and kept watching everyone as she was seeing a large crowd of people for the first time. We even requested the guests to come dressed up in their most fancy outfits in shades of Yellow, White or Pink. 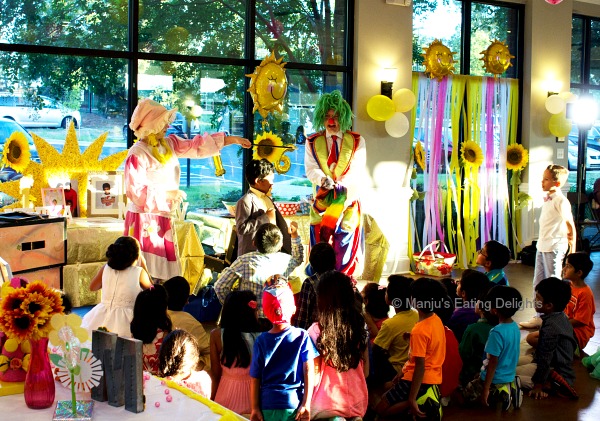 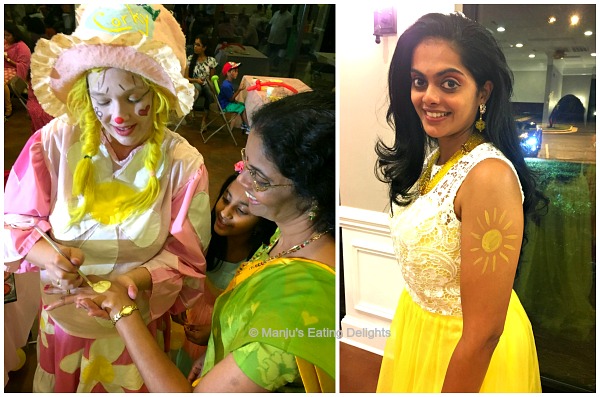 Cake cutting was followed by a fun Magic and Clown show for the kids and they also did balloon twisting and face painting.
Appu as usual got his face painted like spider-man and I have to say he looked like Spider-man in a suit :-D
My mom and myself got some sunshine tattoos. I did not get one for Mihi as she has very sensitive skin...my little darling. 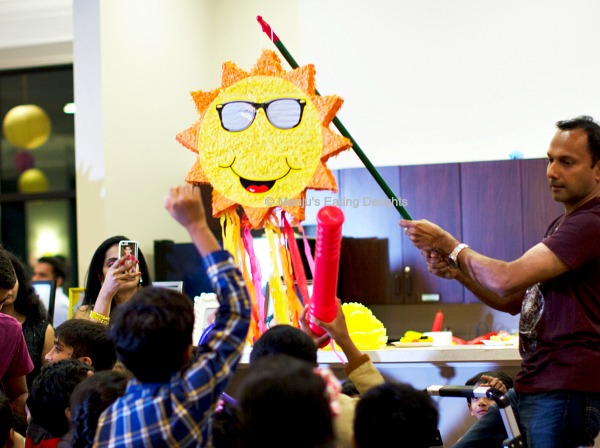 Our next fun activity was the Sunshine Piñata. This wasn’t a pull-string piñata, so Appu made sure he did not forget to take a baseball bat and a plastic rod from home to hit open the piñata. All the kids took turns and finally ripped open the Pinata filled with lots of goodies. Mihi baby watched the whole thing and was so excited. I bet she wanted to just swoop down and take a strike at the piñata herself. 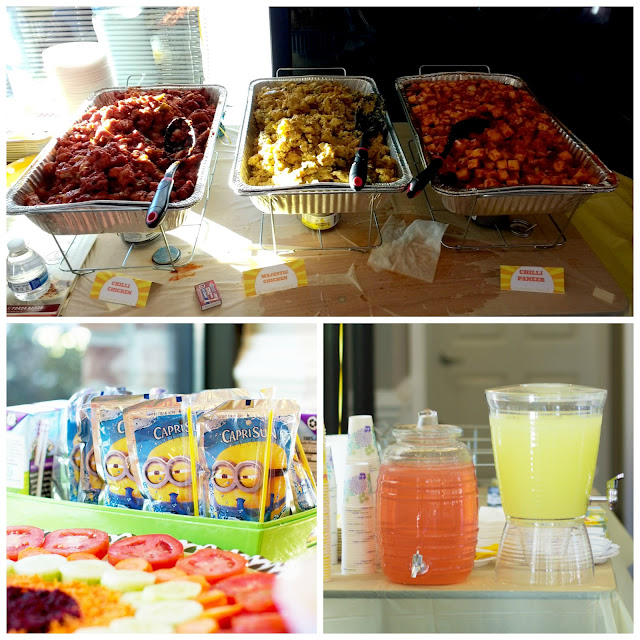 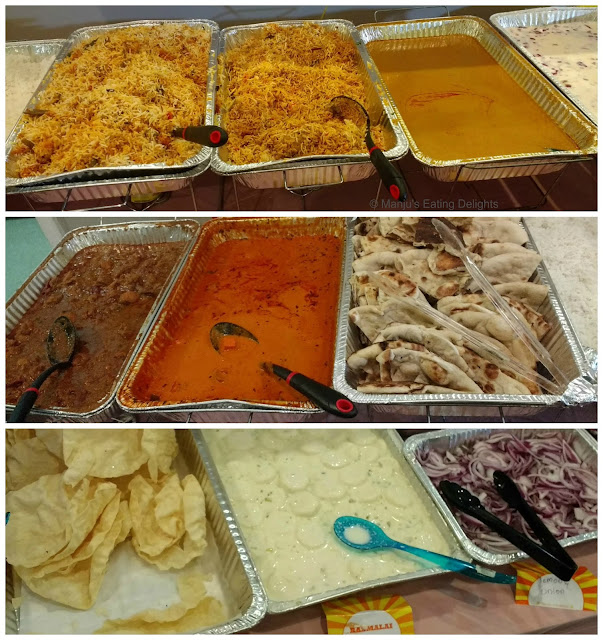 The food for the guests were all catered from a good Indian restaurant.
Appetizers:
Chicken Majestic
Chilli Chicken
Chilli Paneer

In all the birthday party was a lot of fun. The party hall was amazing with a beautiful outdoor view of the lake. There was also a playarea where the kids could run out and play. We had music and laughter and I want to assume everyone had a great time. The entire planning, purchasing and setup of the backdrop and other details did take us a long time and I sincerely thank my parents, Manish and all our friends who came forward to help. 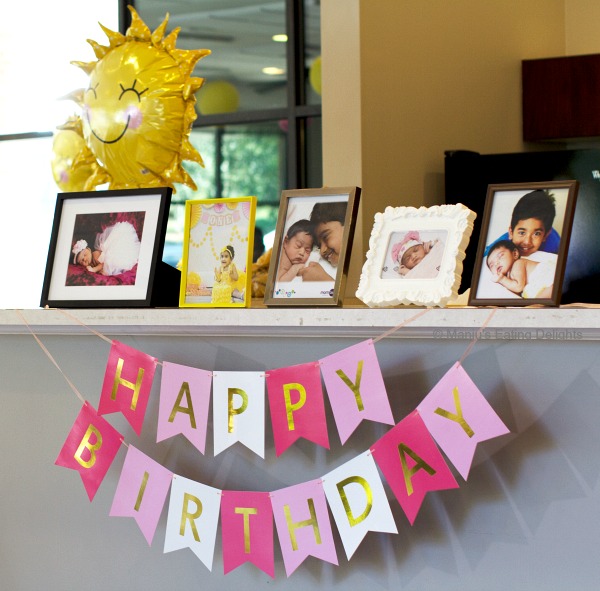 These two babies of ours are our Sunshines. I always want them to smile and be happy and wish all good things in life for them.

I could go on and on describing the details from the party but I guess I've covered most of it. So let me end this post by saying once again hope you enjoyed all the details of the party as much as we did :-)
Reading your comments are the best part about blogging, so feel free to share your comments and thoughts on this party.