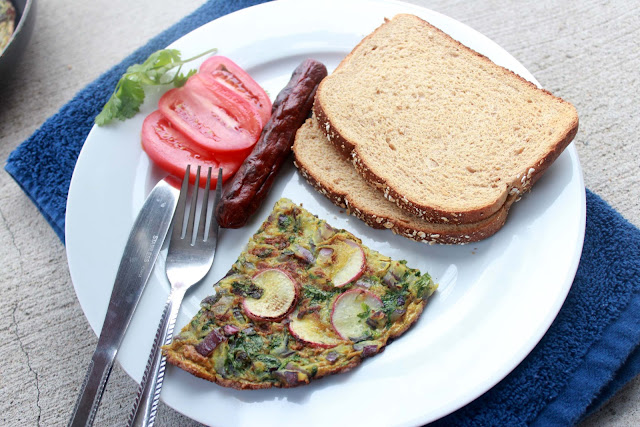 Food definitely brings back a lot of long forgotten and childhood memories. Even a simple omelette :-)
I still remember the taste of the omelette that my dad prepared one school night . He was in the mood to get creative I guess, so he cracked up few eggs, added the usual onions, green chillies , salt and pepper and cut up few slices of Tomatoes and after pouring the entire egg mixture into a large frying pan, he placed the tomatoes on top. I noticed that he cooked the egg very slow on a low heat and slowly turned the rather huge omelette with one quick flip and cooked the other side for few minutes. That was the best omelette that I can ever remember, Juicy and slightly tangy from the tomatoes and so perfectly seasoned.
Another reason why I remember it well is because the omelette almost looked like a pizza with toppings to me :-) My mom often made individual omelettes for our breakfast (which was super yummy btw) , but a huge omelette that looked like a pizza was new to us and me and my sis loved it!

Another 'omelette' memory I want to share was when I started working at this MNC in Bangalore,India. I often used to rush out of my hostel in the mornings without eating the breakfast that was provided to catch my bus (Typical!!) And by the time I reach office I would be starving. Now our office had some beautiful canteens with all kinds of yummy food, starting from our classic simple breakfast items like Idly, dosa, vada , puri...yumm!! to international style food which was omelettes, toast and butter, French toast , fruit salads blah blah...oh I'm hungry now! 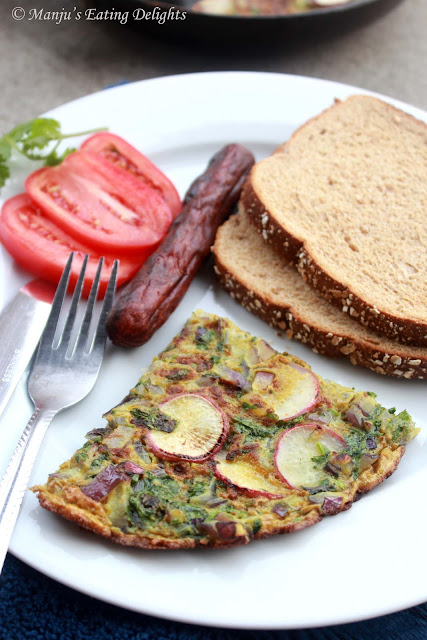 And the most priced and sought after breakfast item was the Omelette  ;-) Anyway, I would happily wait in queue , watching the theater cooking, where one guy would break two eggs, add some finely chopped red onions, green chillies, diced tomatoes, cilantro , white pepper and salt, whip it up nicely and hand it over to the guy who would fry it in front of you. And to watch him was like watching a magic show or something like that. He would pour the entire egg batter (lets call it that) into the pan, cover and cook it for few minutes and then just make a swishing movement with his hand and the entire omellete would just flip out of the pan , turn around and land in the pan...I mean WOW , could you envision that! I could never do that with a big omelette , it would just fall into pieces on the floor if I tried that, I would feel lucky if atleast a small piece landed in my pan :-)
He would then place the whole omlette on our plate and I would happily take it, take 2 slices of toast, some ketchup and butter , sometimes even some jam , fork and knife and happily gorge down the whole thing! Bliss!! 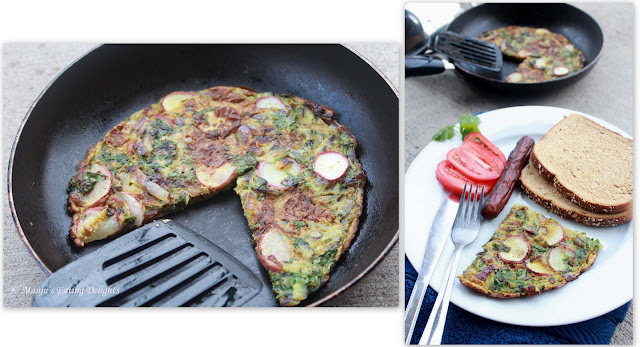 Now last Sunday morning we woke up at 10:30am or something and I wasn't in the mood to make some elaborate breakfast, and the easiest and quickest option was an Omelette. So with my tummy grumbling away, I enter the kitchen and get this crazy idea to make an omelette with red radish in it. I had a whole bag of fresh red radishes and was planning on making something with it for lunch. So I go ahead and repeat the same things my dad did and instead of Tomatoes , I added Red Radishes. Aren't they simply pretty!! :-) 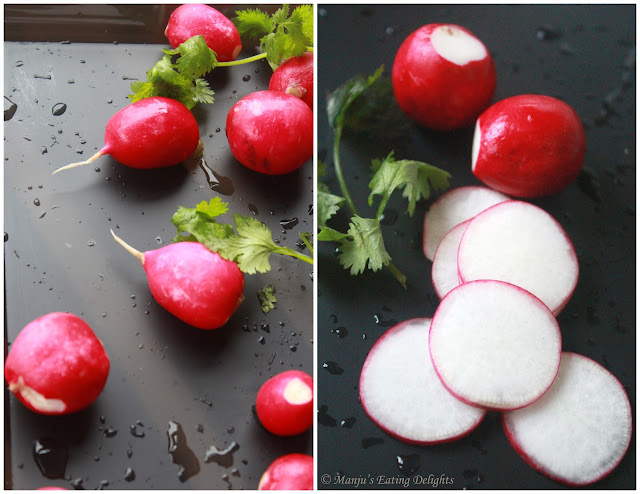 Well actually I added the radish in the egg batter itself, herbed it up with freshly chopped Corriander leaves and spiced it up with a little Cumin powder, Turmeric powder and black pepper powder. Double Bliss! :-)
Oh and it was raining outside that day, so this was a perfect lazy Sunday brunch with a cup of piping hot masala chai...should I say Bliss again?? :-)

The Omelette was juicy and so so flavorful. I could just eat it like that, without the toast or anything. Even my lil' guy ate up a few mouthfulls , a big deal in his case :-)
The radishes cook very well if sliced thinly and they add a mild crunch and a mild peppery flavor. The cilantro elevates the flavor to another level and the mild hint of spices all blends together really well in this egg preparation. This recipe is a keeper, I tell you! 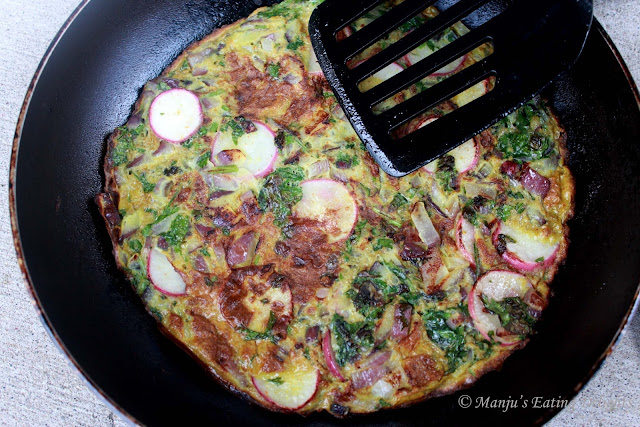 Directions:
1. Crack the egss and beat them with a fork or a whisk for few minutes, until they look smooth and has slightly increased in volume.
2. Add all the other ingredients and slowly mix them well. 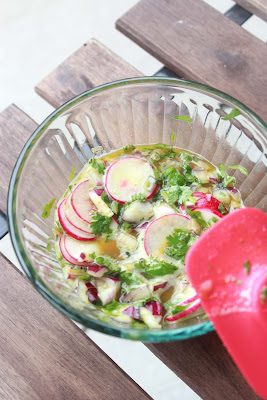 3. Heat your skillet or non-stick pan and heat the oil/butter.
4. Reduce the heat to medium-low and pour the egg mixture and cover and cook for 2 minutes or until the omelette has slightly set and is not runny. (evenly space out the radishes and onions if you like) 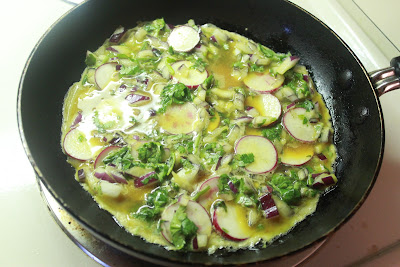 5. The omelette would have puffed up when you open the lid and then gently lift it and turn it to the other side and again cook for 1 minute.
6. Serve hot with toast ! :-)

Did you know ??
1. Even with just 1 egg you can make a thick omlette if you whisk the egg well , incorporating some air into it and then cover and cook it. (For this dish you may increase the number of eggs if you prefer. I got a rather thick omlette which was more than enough for us. )
2. Cooking eggs on a low flame allows it to cook slowly and evenly, almost mimicking an oven kind of heat transfer. It also reduces the egg from burning and getting brown on the bottom. 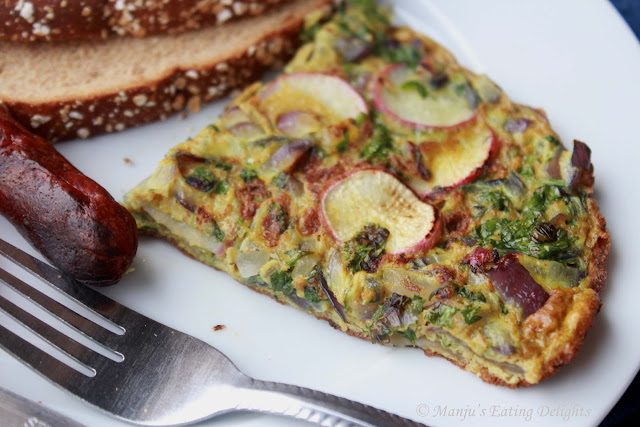 A perfect healthy breakfast/brunch dish , don't you think? Have a great day guys!

Don't forget to participate in my Giveaway (click here), it ends on Nov 1st!